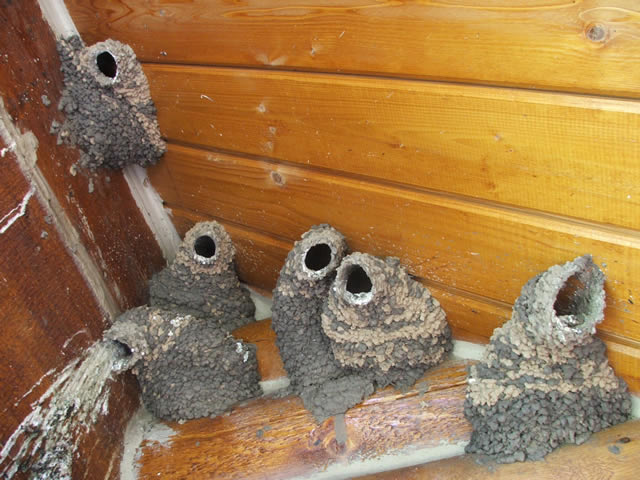 I have got to get some swallow control out here fast.  My home’s pretty new, just about 4 years old.  I did a lot of the work on the home myself, and was my own general contractor on the things I couldn’t or didn’t want to do, like the framing, concrete pouring, etc.  The point is, I’ve been involved with building my home from the beginning.  After it was built, I dove into landscaping and have put a lot of sweat, blood and sometimes bad words into long weekends devoted to making my house look beautiful.

And now, despite all my hard work, I need swallow control.  These swallows aren’t as awful from a distance.  I actually love to watch birds, and these birds are interesting.  Swooping, diving, keeping the mosquito population down and singing.  But, no matter how interesting they are to watch from a distance, I can not stand it when they try to build their mud nests around my house.  I keep trying to hose the mud down before they get very far on their nest-building, and I thought it would discourage them.  I really thought they’d move on to another area or at least find a more natural habitat.  But, no, they just try building on a different spot on my home.

First, it was directly on the stucco right above my front door.  After I sprayed that, they started building behind the light sensor.  I knocked down the mud drops that were the beginning of that nest, only to have them select an area out of my reach and out of the reach of my hose.  Now, they’re almost done building their mud nest on the stucco directly underneath the eaves at the very top of my home.  I’m at my wit’s end, and need professional swallow control help.

It wouldn’t be so bad, if it was just that sticky and then cement-like mud they make to build their nests.  That’s bad enough, because it never really comes off completely unless I get up there and physically scrub it off with a wire brush.  No, the reason I need professional swallow control is because they are pooping everywhere.  They land on the gutters, window sills, stone edges, patio.  And, everywhere they sit, they poop.

It’s disgusting dealing with the mud drops, mud nests and swallow droppings, and I just have had it.  I would rather be spending my time putting in the stone walkway I’ve designed, or building the gazebo I want.  Instead, I’m wasting my limited time trying to do swallow control myself, and I’m done.  I’ve spent too much time, too much money, and too much effort making my home look great just to have it all messed up by a bunch of free-loading swallows.  Enough is enough.

I so desperately want the Davis County Exterminator to get rid of my brother.  Look, we’re all baby swallows, tucked up safely in this nest under the eaves of someone’s house.  But, I swear, this nest is getting smaller and smaller by the day.  He’s just crowding me out and cramping my style.

Mom went through a lot of trouble to make this mud nest for us before we were born.  Bit by bit, she brought tiny chunks of mud from a small distance away and stuck it up on this stucco, right over someone’s front door.  She brought in some tiny twigs to help give it structure and took her time to build it just right.  Sure, some of it fell down and spattered across the doorstep, and some of it inevitably got dropped on cars or sidewalks on her way back and forth.  But, it’s wonderfully safe, making it extra hard for any predators to get to us.  And Mom says now that us baby birds are here, the Davis County exterminator has to obey really specific laws about how to remove barn swallows, so we’re pretty safe even now.  I don’t want the Davis County exterminator to get rid of all of us, just my brother.

After we hatched, Mom worked super hard to keep us fed, and let me tell you, we’re ALWAYS hungry.  All day long, the four of us crowd at the tiny nest opening, sticking our heads out, opening our beaks as wide as possible, and taking our turns getting fed.  But, not my brother.  He always pushes and shoves, and switches places with us to try to trick Mom into feeding him twice before she gets to the rest of us.  You know, he almost pushed me right out of the nest the other day, and since he gets fed more, he’s getting bigger and bigger and it’s getting harder and harder to push back.  But, the rest of us baby swallows have had it.  We’re saying enough is enough and starting to fight back.

My sister came up with a great idea the other day.  When Mom flies off for another morsel of food, she stands up, gets on the edge of the nest, and turns around to poop out of the nest.  We learned to do that early on – let the poop fall down out of the nest onto the front step of this house instead of staining our own nest.  Well, when she’s done, she spreads her wings just a little wider and pushes big brother further back into the nest.  By that time, Mom’s back and the rest of us get a fighting chance to get the food.  It was perfect until big brother caught on.  Now we’re back to getting pushed around a lot.  So, I’m wondering, what would it take to get the Davis County exterminator to get rid of one big baby swallow?

I’m just a sweet, old tabby cat who wants to take naps in the soft grass in the backyard instead of worrying about how to get rid of swallows.

There is a spot in the backyard that is a little spot of cat heaven.  It has been my spot and mine only for the last three summers.  The grass is soft, and wonderfully fragrant right after a good mow, the sun hits it just right in the morning, so it’s warm on my belly, but not too warm.  It’s right in between the house, where I have food and water, and the grouping of trees with its luscious and plentiful squirrels and birds.  I can chase them, if I want to, but as the years go by, I prefer to think about the chase as their chitters and chirps invade my cat dreams in the sun.

But, this year is different.  This year, my perfect napping spot is tainted by the presence of swooping, angry mud swallows.  At first, I enjoyed watching them as they flew between the small nearby pond and the house, tiny bits of mud in their beaks.  They would daub the mud up onto the house itself, right under the eaves, building up a nest.  I didn’t think much of it, although occasionally I would gather up enough strength to rise and swat at them as they flew overhead, especially after a little glob of mud rained down on my nose.

Now the nest is built, and I thought it would mean the end of the incessant flying back and forth and back and forth.  Little did I know it was about to become worse.  Now, my thoughts are on how to get rid of swallows instead of dreaming of chasing squirrels and deciding whether to go inside and eat or stay and sleep.

The eggs have hatched, and the tiny baby birds are amazingly noisy, keeping me from fully falling into my cat dreams.  To make matters worse, the two adult swallows now see me as a threat, and actually try to chase me out of my perfect cat-napping spot.  They swoop down on me, daring to get close enough that I think I’m going to get a beak in the neck if I’m not careful.  I have to watch the two of them at once, attacking and swirling around me.  I leap, and twist and bat at them with my powerful cat claws, but they circle around too fast and avoid my half-hearted attacks.

One of these days, I’ll figure out how to actually get rid of swallows.  Swallows come back year after year after year, and I just don’t want to deal with the constant chirping and dizzy swooping.  Sigh.  Maybe I’ll just look for a new perfect napping spot.

SMAT!  “Oh, man, you gotta be kidding me!”  A small drop of mud spattered across Mark’s shirt as he walked in the door.  It had a tiny twig stuck in it.  “Time to call for swallow trapping, my friend!” he called to Art, the man behind the lunch counter.

“What’re you whining about, now?” laughed Art, “A silly little bird building an innocent little nest?  Yeah, we don’t want to dirty up your pristine clothes!” It was true, Mark painted houses for a living, and was already covered in drywall dust, dried primer and paint of several shades.  You could barely tell where the swallow had dropped the mudball on him, mud that was intended for making its nest right above the door of the tiny diner.  “You want the usual?” Art asked, and disappeared into the back, not even bothering to wait for Mark’s answer.

Mark grabbed up a napkin and wiped at the mess on his chest, as he sat down at the counter.  Soon, he was chewing on a turkey sandwich with a side of Art’s famous greasy fries.  He didn’t have much time to eat, because he had a big job to get done by the end of the day, but he always had time for lunch at Art’s diner.  Around a mouthful of fries, he told his friend, “I’m serious.  You’ve got to trap the swallows or get rid of them somehow.”

“I’m telling you, I’ve seen it a lot with these houses I paint.  Swallows will stick their mud nests everywhere, and the mud and their bird crap stains the walls or the concrete.  Those suckers will come back year after year, too, if you don’t do something about it now.”

“I’m not sure you can knock the nests down, though,” Mark’s counter-neighbor offered.  “I think they’re protected, aren’t they?”

“Maybe,” said Mark.  “I don’t know what the law says about that.  Just know they’re a darned nuisance.  Pain to clean up after, too.”

“Sure are a nuisance,” said Art.  “They dive-bombed my wife when she opened this morning.  Maybe I should call someone?  ‘Cause I sure don’t have the time to deal with ‘em.”

“I think you definitely should get someone out here for swallow trapping,” Mark said.  “Ever hear of swallow bugs?  Those bugs just drop right off the bird and infest a place.”

Art looked around his diner and shuddered.  The guy next to Mark turned a little green and put down his sandwich.  Mark said quickly, “Oh, I don’t think they hurt humans, but you don’t want them around the place, do you?”  Art had his wife call for a professional swallow trapper that afternoon, just to be on the safe side.