My wife gave me the greatest gift this year.  She converted the garage into a man-cave.  I’m pretty sure she didn’t intend the porcupine in the garage to be part of the gift, but it made for a pretty eventful Christmas.

I’m not a big gift-guy, but Christmas morning, I was kind of surprised that I didn’t have a package from my wife under the tree.  She usually goes a little overboard and gets me a big, nice gift.  I did get the typical random gifts from my children:  a tie tack, cheap sunglasses, a matchbox car and a handmade card.  After the presents were all open, though, my wife wouldn’t let anyone break into the doughnuts and hot chocolate.  Instead, she announced we were going to the garage.

The older two children got grins on their faces, and the younger two whined about having to wait a few extra minutes for their doughnuts.  I shrugged and dutifully followed her.  Then, she opened the door to what was once a mess of boxes and random tools.

It was straight out of a magazine.  Tools were nicely organized in a corner with a work bench.  My wife had obviously gone through the contents of the boxes, gotten rid of a lot of things, and carefully stored the rest of our boxed belongings away.  In their place was a comfortable couch, a fake bearskin rug, a couple of side tables, and the television set from my wife’s office.  I could not believe it.

I was so blow away by what my wife had done for me that I didn’t even notice the porcupine in the garage.  But, my wife gasped and pointed.  A chunky, lumbering, spiny animal had been happily munching at the handle of my grandfather’s hammer.  It had probably gotten in there while my wife as putting the finishing touches in my new man cave, and who knows how long that porcupine had been stuck in the garage.  Days, maybe?  The leather couch had a gaping hole where it had been eaten through, and while the well-worn wood of my grandfather’s hammer handle was still mostly there, it had suffered some damage.

The kids were shooed inside, happy to finally attack the doughnuts and my wife and I tried to chase the porcupine out of the garage.  It was happy in there, though, and we retreated quickly when it puffed its quills out.  Fortunately, over the course of the next couple of hours, we were able to lure it out of the garage, but I was afraid it would quickly find its way back into my amazing new hangout.  I wasn’t going to go out to watch a game and share the space with a porcupine in the garage.  So, we called an animal removal service to come out and remove the porcupine as quickly as possible.  And, I went back to wondering what I’d done right in my life to deserve my wonderful wife.

The screams of a team of fourteen- to sixteen year-old girls bounced around the gym walls.  No, we hadn’t just won a game.  No, no one had made an amazing shot from halfway across the basketball court.  These were terrified screams, and it took me a good ten minutes to calm everyone down to the point where I could figure out just what had happened.  There was a possum in the gym under the bleachers.

Our high school’s girls basketball team is really good.  These girls aren’t the type to worry over whether they’ve broken a nail, or jump on a chair if they see a spider on the floor.  These are strong, hard-working young women who work hard at practices so they can win regionals.  This is not a wimpy basketball team.  And, I love being their coach.

So, you can imagine how surprised I was to hear all the screaming and running when I ran back to my office to get something.  I’d left the team captain in charge of warm ups and drills, as I usually do.  But, the screeching had me tearing back through the nearly-empty high school halls back to the gym.  I was ready to do battle with whatever was terrorizing those girls.

Apparently, what had happened was they were all warming up and stretching for practice.  They’d run laps around the gym and then got into formation to stretch out leg muscles.  One of my forwards saw a glint of something in the darkness under the bleachers right in front of her, and she stopped stretching and got closer to find out what it was.  Some of her teammates joined her to figure it out.  Then, one of my girls reached her hand in between two rows of seats, and touched something furry that let out this horrible sound and stench, and showed a row of gleaming ugly teeth.  That’s pretty much when the screaming started.

I calmed everyone down, and cautiously approached the bleachers where they’d made “contact.”  I hate to admit it, but my heart was pounding hard in my chest, and I struggled to maintain my composure.  I knelt down in front of the bottom bleacher and let my eyes adjust to the darkness underneath.  I pulled out my keychain with a small flashlight, and clicked the light into the gloom.  Hopefully not a single girl on my team noticed me jump when the tiny light showed a grey-ish animal, teeth bared and eyes gleaming, backed up against the wall.  Then, I realized, it was only a possum in the gym.

I knew it wouldn’t hurt us, as long as we left it alone.  I made the girl who touched it go wash her hands, which she did willingly enough, and left a message for the building maintenance crew to get someone to get rid of the possum in the gym.  We still held practice that night, but my girls had a tough time keeping an eye on the ball when they were too busy eyeing the bleachers to make sure the possum stayed under there. 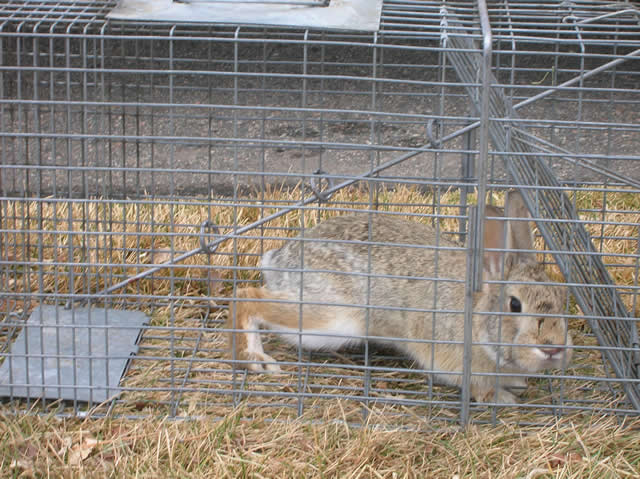 My boyfriend’s a pretty tough guy.  He served in the Army for six years.  He worked construction while putting himself through school.  And, even though he now works at an office job, he spends his off-hours doing big projects around the house, hunting, or taking the family camping.

But, when he got a rabbit bite, he actually yelped and tears came to his eyes. I’ve never seen him cry out in pain.  Even when he accidentally put a nail through the fleshy part of his ring finger, he just grunted and drove himself to the hospital to have it removed.  Apparently, the surprise and pain of a rabbit bite was enough to get the best of him.

Our daughter had been playing on the trampoline with her friends, and she came rushing inside to tell us excitedly that we had rabbits in the backyard.  We’d been aware we had rabbits around our property, but we’d kind of put off doing anything about it.  When my daughter discovered the rabbits, she was over the moon.  She’d wanted a pet for a long time, and had figured the rabbits came to be her pets.  So, my boyfriend took the opportunity to show her and her friends a few things about wild rabbits, teach them how to be safe around them, and that they definitely are not pets.

My big, tough man didn’t think to put on his work gloves.  He took a rabbit by surprise and grabbed it up, intending to use it to teach the girls.  That’s when the rabbit bit him.  Lesson learned, I guess.

The skin was pulled back and the cut was ragged.  It had already started to swell and it would probably bruise. As my boyfriend was washing the wound, I asked him when he had last had a tetanus shot.  That’s when I learned something new about this wonderful, strong man.  He was afraid of shots, so he hadn’t even thought about getting a booster.  It was probably fifteen years since he’d had a tetanus booster.  I choked back a frustrated retort.  How often did he go out in the woods by himself, hunting or camping?  He’d spend so much time preparing for any contingency, but he’d failed to do this one simple thing.  I didn’t say anything to my boyfriend, but I did inform him that we were going to the doctor to get the rabbit bite looked at.

Once he as at the doctor’s office, I informed him he was going to get a tetanus shot, end of story, and the doctor backed me up.  Now I know he’s safe, and my daughter and her friends got an excellent lesson about how to behave around wild animals, no matter how cute they are, it’s time to focus on getting rid of the rabbits.  Cute or not, they’re starting to destroy the yard and have already proven they’re a danger.