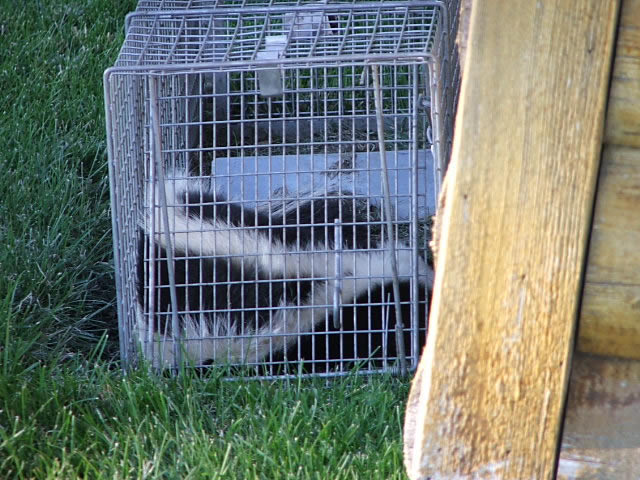 The neighbor behind us has a very large field.  They used to have horses on their lot, and then they farmed it a little, but now it’s just a big, weedy field.  They’re pretty good about keeping the weeds mowed down, and their field has been home to several feral cats that have been great at keeping the mouse population down.  We even feed a couple of their cats in addition to our own, because it’s nice to be worry-free about rodents like mice, rats or voles.  But, we started keeping our two cats inside and we stopped feeding the cats in their field once the skunk moved in.  Our neighbors love the wild animals around here, so they are refusing to get skunk control.

The neighbors have a very large shed at the end of their field closest to my yard, and a skunk has recently made its den underneath.  Even though it hasn’t sprayed close to our home, the smell is still overpowering, especially when the wind is blowing our way.  When my children are playing in our backyard on their swing set or in the sandbox, the wind shifts and we get a whiff of a musky wild smell.  We’ve gotten kind of used to it, but it’s not pleasant.  We used to be able to enjoy the smell of fresh-cut hay or the blooming cottonwood trees as we played catch or Frisbee in the backyard.  But, now, we end up spending more and more of our summer outside time at a park instead of our own property, because of the skunk smell.

If our neighbors had skunk control technicians come out to get rid of the skunk, we could go back to enjoying summer at home, we could start having barbeques again, my cats could roam freely in our yard without fear of being sprayed, and I wouldn’t constantly worry about my children around a skunk or its fleas or ticks or mites, or whatever else it might have.

I’ve talked with our neighbors and they’re actually quite proud of having a wild animal living back there.  Their home and backyard is far enough away from that shed that it doesn’t bother them, but it’s close enough to my yard and house that it continues to bother us.  Perhaps I’ll go back to putting cat food out, while keeping my children and cats inside for a few days.  Maybe that’ll be enough to lure the skunk into my yard, which would justify me calling for skunk control.  I won’t even have to tell the neighbors.  They’ll probably just assume the skunk moved on to someone else’s shed.

I know, I know, if I’d taken the time to clean out the barn, I wouldn’t have to worry about skunk removal.  But, what’s done is done.  There, amongst the broken lawn mower, the old bag of dog food that I’d forgotten about, a couple of empty gas cans and all the random stuff we carted out of our newly remodeled home, lives a skunk.  It’s bigger than a poodle and fluffy, and it most definitely does not want to move out of my barn.

Usually, I take extra care to winterize our entire property.  As fall is ending and the cold weather sets in, I take care of everything, including giving the lawn a last good mow, placing tree stakes near all the trunks, cutting back the roses and cleaning out the barn before making sure the house is ready for the cold months ahead.

Things were a little different this last year.  Our last child graduated high school and then headed off to college.  We had the house to ourselves.  My wife was determined to remodel, and I think it had more to do with combating empty-nest syndrome than a desperate need to have a new master bath, but I was happy to comply.  College doesn’t come cheap, so we did most of the work ourselves, which made for an extremely busy fall.  It never occurred to me that skunk removal would be the consequence to ignoring my normal self-imposed duties.

But, here I am, standing in the doorway of my barn, dressed in a cheap hazmat-like suit purchased at the hardware store, armed with a net on the end of a long pole.  As the skunk turns and tries to burrow its way deeper into the debris littering the barn, I realize a net is probably not the best skunk removal tool.  I realize I am standing at a crossroads of choices – either press forward into the dark recesses of the barn chasing after this odorous animal, or back out gracefully and get a professional trapper who is experienced at skunk removal.  I’m a man, and I assume I can do it myself, so I press forward carefully.

In the dim light, I become aware of little brown pellets littering the floor, especially around the bag of forgotten dog food.  I realize the sorry state of my barn gave it a perfect place to hole up for the winter, and the dog food and rodents provided an excellent food source.

I stop, aware of a scrabbling noise on my right.  I can just make out the form of the skunk as it tries to squeeze itself further out of sight, and I approach carefully, stretching out my net.  Suddenly, the skunk whirls around and lifts its tail, and I realize I made the wrong choice trying to remove the skunk by myself.  But, by now, it is too late, and I can only hope the weak respirator I wear and the cheap paper covering I wear over my clothes will keep the worst of the skunk spray off of me as I run out of the barn.

From my perch up in the tallest tree, I can pretty much see everything that goes on around me on this property, and one of the most interesting things I’ve witnessed over the last few weeks was the owner’s attempt at skunk trapping.

As a bird, I’m not really that opposed to skunks myself.  They can’t really hurt me, as a raven, and if they spray some stupid dog or fox, I just fly away from the smell.  But, I could tell this skunk was really getting on this guy’s nerves over the last few weeks!

First, it made free to dig up in the guy’s vegetable garden as it hunted for bugs to eat.  Destroyed some of the crop and left a horrible mess.  Then, it decided to burrow under the guy’s front porch.  He was afraid he’d be sprayed if he surprised the skunk while walking out to his yard, and even I could see it was going to damage the concrete, making it sink down eventually.  One night, the skunk got hungry and toppled over the garbage can, munching on everything edible it could find.  The owner came out the next morning to find a horrible mess on the lawn.

What really sent the owner into a horrible rage was when the skunk got into the chicken house and ate up some of the eggs.  It even attacked one of the chickens.  At first, the owner thought maybe a fox was to blame, but when he figured out it was a skunk, he reached the end of his rope.

He went out and got himself a skunk trap, set it up in the vegetable garden, and caught that smelly skunk.  Problem was, he had no idea what to do with it after that.  He was so afraid to approach the skunk in the trap.  He tried walking up to it really slowly and quietly, he tried throwing a tarp over it.  I spent a good three or four hours just watching this guy circle the cage, try all kinds of things, work up his nerve just to get scared again.  Highly entertaining!  Truth is, that guy just didn’t know what to do with the wild skunk, and he didn’t know what it could do to him.

He should have called a professional to come out and trap the skunk in the first place.  A wildlife removal specialist already has the skills and experience to get rid of a skunk, and will do it legally.  Eventually, he called in an expert at skunk trapping, who not only got rid of the skunk, but repaired the damage the skunk caused.

Now, I wonder if we can get another wild animal to attack the guy’s house again.  I’ve got to get my entertainment one way or another, and watching him fumble around with wild animals is always good for a laugh!

I love my husband, I do, but he knows nothing about skunk removal.  He’s strong, he’s good to me, he’s good to the kids, he works hard, he takes care of the house, he makes sure the yard looks good.  He’s an all-around good-guy.  So, please don’t take this the wrong way when I say, sometimes, only sometimes, he’s a stupid man.  If only he’d just listen to what I say.

It was pretty clear we had a problem on the property when the dog came in whining and reeking of skunk.  The poor dog just looked sheepish as we contemplated calling in a Hazmat team to clean him up.  We finally sucked it up and did the awful clean-up ourselves, but I swore I’d never do it again.  He’s still afraid to go outside!

My darling hubby went out that night and bought us a skunk trap.  That was smart, I thought.  He set it up in the backyard, close to the house.  We had it out there for two days before we caught anything.  It was a long two days, because I didn’t want the kids playing outside until we were done with the skunk removal.  Awful enough to clean up a dog, I couldn’t imagine how bad it would be with a child!!

This was an event, for our family, catching the skunk.  I “suggested” ever so gently that my husband bring out an old towel or two to throw over the cage, place it and the skunk in the truck, and drive off with it somewhere to leave in the great wide wilderness.  He insisted he didn’t need to go to those lengths.  I just grunted, and muttered something about how this was his responsibility so I’ll just keep out of it.  Then I grabbed the video camera.

It must’ve taken my husband a good fifteen minutes to creep across the yard towards the cage, the skunk eyeing him the whole time.  He was completely unarmed – just wearing his jeans, t-shirt and a ball cap.  I guess he figured stealth and the LA Dodgers logo were his best defense.

Finally, he arrived at the cage.  Another three minutes to slowly lift his arm and reach out to the trap’s door.  I think I finally realized what his great plan was – he was just going to open the trap and let the animal go.  Was that wise?  I started to question him, but he just shushed me and moved the other hand up to steady the cage.

I kept the video camera going as I watched the man who is usually my hero, kneel directly in front of the cage and open the door, to let the skunk out.  I think the skunk was just as surprised at this course of action.  It crept up to the front of the cage, and quickly ran out, stopped for a moment to look at this strong man, and ran off out of sight.  My husband is a truly lucky man, not getting sprayed, but I just had to ask him, “What was the point of setting a skunk removal trap when you’re just going to let the skunk back out into our own back yard?”

We have agreed to not talk about this ever again with each other.