There is a skunk in my yard and he is at war with my dogs. It started about two weeks ago after we had about 3 days of hard rain.  The skunk was denning underneath our shed out back, and I think that the rain may have flooded it out which is why we’re just now seeing activity from it.  The problem is that now that it’s out it is wandering around our property and we have two small dogs.  Needless to say the two types of animals do NOT get along.

Even though I know the skunk is out and about, the sightings are scattered.  We will smell him long before we see him, especially with the dogs.  It has been a nightmare dealing with it, if we let them out and forget to watch them they’ll be long gone, chasing after the skunk before we realize it and can stop them.  In two weeks, they have each been sprayed twice; the hydrogen peroxide and baking soda are practically all gone from using them so much and I can still smell the skunk lingering in their fur.         I’m not even sure if the skunk is in the yard or if it’s hiding out under the shed still.  I know that when I let the dogs out the immediately head for the foundation of the shed, but they just sniff and don’t usually bark or scratch.  When they see the skunk, though, they go absolutely bananas!

We need help getting rid of this thing.  The skunk is turning our backyard into a war zone, world war three is happening: dogs vs. skunk!  I’ve looked up skunk traps and skunk repellents, but it seems unlikely to me that they would help get the skunk out of my yard for good.  I’d rather have him trapped and relocated so that I know he’s gone.  I need a professional skunk trapper and I don’t even know if that’s a real job! 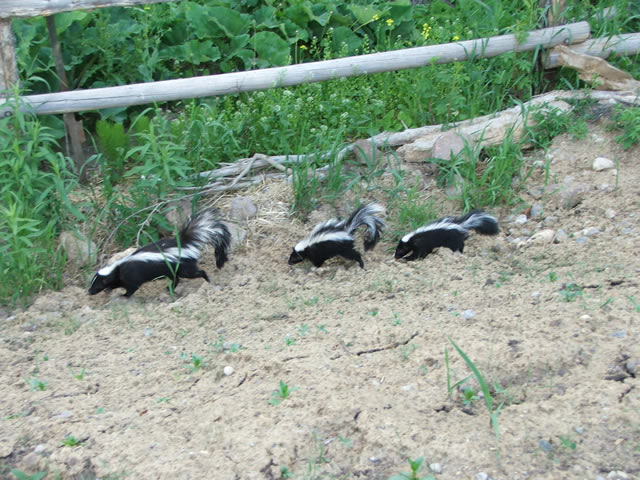 I love my husband, I do, but he knows nothing about skunk removal.  He’s strong, he’s good to me, he’s good to the kids, he works hard, he takes care of the house, he makes sure the yard looks good.  He’s an all-around good-guy.  So, please don’t take this the wrong way when I say, sometimes, only sometimes, he’s a stupid man.  If only he’d just listen to what I say.

It was pretty clear we had a problem on the property when the dog came in whining and reeking of skunk.  The poor dog just looked sheepish as we contemplated calling in a Hazmat team to clean him up.  We finally sucked it up and did the awful clean-up ourselves, but I swore I’d never do it again.  He’s still afraid to go outside!

My darling hubby went out that night and bought us a skunk trap.  That was smart, I thought.  He set it up in the backyard, close to the house.  We had it out there for two days before we caught anything.  It was a long two days, because I didn’t want the kids playing outside until we were done with the skunk removal.  Awful enough to clean up a dog, I couldn’t imagine how bad it would be with a child!!

This was an event, for our family, catching the skunk.  I “suggested” ever so gently that my husband bring out an old towel or two to throw over the cage, place it and the skunk in the truck, and drive off with it somewhere to leave in the great wide wilderness.  He insisted he didn’t need to go to those lengths.  I just grunted, and muttered something about how this was his responsibility so I’ll just keep out of it.  Then I grabbed the video camera.

It must’ve taken my husband a good fifteen minutes to creep across the yard towards the cage, the skunk eyeing him the whole time.  He was completely unarmed – just wearing his jeans, t-shirt and a ball cap.  I guess he figured stealth and the LA Dodgers logo were his best defense.

Finally, he arrived at the cage.  Another three minutes to slowly lift his arm and reach out to the trap’s door.  I think I finally realized what his great plan was – he was just going to open the trap and let the animal go.  Was that wise?  I started to question him, but he just shushed me and moved the other hand up to steady the cage.

I kept the video camera going as I watched the man who is usually my hero, kneel directly in front of the cage and open the door, to let the skunk out.  I think the skunk was just as surprised at this course of action.  It crept up to the front of the cage, and quickly ran out, stopped for a moment to look at this strong man, and ran off out of sight.  My husband is a truly lucky man, not getting sprayed, but I just had to ask him, “What was the point of setting a skunk removal trap when you’re just going to let the skunk back out into our own back yard?”

We have agreed to not talk about this ever again with each other.