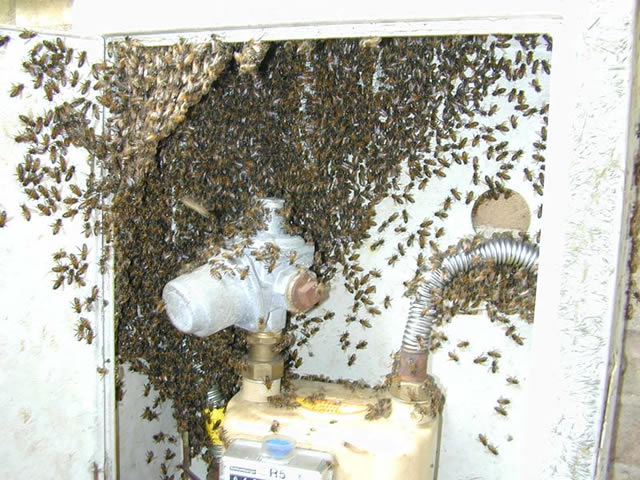 As much as I was happy we were finally taking care of our honeybee problem, it hurt me to watch it happen.  We’ve lived in this home for years, and a couple of years ago, we started noticing a few more bees than usual were hanging around our property.  It was great for our fruit trees, I’ll admit, and we got some great yield the last two years, but when our friends and family had to duck and weave to get to the front door, we knew we had a serious honeybee problem, and it was time to finally do something about it.

My son wanted to take care of it himself, even though we had no idea where the actual hive was.  He swore he could save us money, but I couldn’t stand the thought of my son up against all those bees.  He could get seriously hurt, falling off a ladder or getting stung.  No, I wanted a true professional honeybee removal company to take care of it.  They’d be able to find the hive faster, make sure all of the honeybees were removed and do it much safer than my inexperienced, but well-intentioned son could.

So, I was relieved when the truck drove up, full of equipment and a couple of experienced young men.  They easily found the hive in one of the decorative stucco-covered pillars under the deck that ran the full length of the house.  I couldn’t believe how close the hive had been to where we eat, sleep and live.  How did we let it go on this long?

I must admit, though, my heart dropped when I realized what these honeybee removal technicians had to do to get to the hive.  They broke out the rotary saw and cut into the stucco all the way down to the wood, bees swarming everywhere.  I knew it would be repaired, but it was still a shock.  But I was not prepared for the shock I got when he pulled the stucco off.  I’ve never seen so many bees in one place.  There must have been thousands.  Wax, long-dead bees and honey dripped and lined the inside of the pillar.  The air was thick with bees and the sound of their anger at being disturbed.  Bit by bit, they pulled pieces of honeycomb out of the pillar and placed them carefully in a special box.  Honeybees were carefully vacuumed into a special device and then also deposited into the box.  They took special care with the queen bee, making sure she was unharmed.  My son gave me a look that said he was grateful I didn’t take him up on his offer to do this by himself.

Our honeybee problem was extensive, because I’d let it go on so long without having them removed.  Now, after a lot of damage and several hours, they were now going to live somewhere else, far, far away from our home!

I absolutely adore sunflowers, so I planted a whole bunch by the side of my house this summer, and get yelled at by my neighbor and the meter reader who wanted me to get rid of the bees.

I’d recently traveled throughout the South of France.  Van Gough made the ancient town of Arles famous with his paintings of sunflowers, and my husband and I rented bicycles and rode through the countryside, gazing over entire fields of the gorgeous flowers following the path of the sun.  My favorite memory was biking near the old fortress and castle of Carcassonne.  I don’t know how many pictures I took, gazing at the castle across fields of sunflowers in full bloom.  Gorgeous.

So, when we got home, I planted those memories all around my house.  They grew up quickly in the hot sun, and I thought of France every day I went outside.  I never even considered they would attract bees, yellow jackets and wasps.

My neighbor has three children and a dog who feel free to play in everyone’s yard, especially mine.  She marched over that summer, and informed me that I needed to remove all the sunflowers.  “They’re attracting bees, and that’s dangerous for my kids.”  I sweetly reminded her that her children didn’t need to play in my yard, after all.  The bees weren’t bothering us.  She harrumphed and marched back home.

The man who reads our meter was a little harder to ignore.  He has been upset, because our utility company hasn’t invested in the new gadgets that allow him to read everyone’s meter from his car as he drives by.  He still has to get out and tramp through everyone’s yards, reading their meters by hand.  I’ve kept the meter weed-free, as I’m supposed to, and the sunflowers weren’t planted in front of it, but I was outside when he came by.  It turns out the poor man is allergic to bees, and he didn’t appreciate the beauty my sunflowers had to offer as much as he feared being stung.  He tersely asked me if I could do anything to get rid of bees.

So, my beautiful sunflowers, memories of my trip to France, were becoming a nuisance.  Well, not the flowers themselves, of course, but the insects they attracted.  I still held out, though, because of what they meant to me.  Then, my husband found a couple of holes in our siding, with bees coming in and out of them.  Apparently, a hive had been built in our walls, and the only way we could get rid of the bees was to cut a part of the siding away and have them removed professionally.

My yard is now sunflower-free, but my loving husband buys me a few every week to place inside my home.  I keep my memories of France, and my neighbor, meter-man, and husband are much happier.