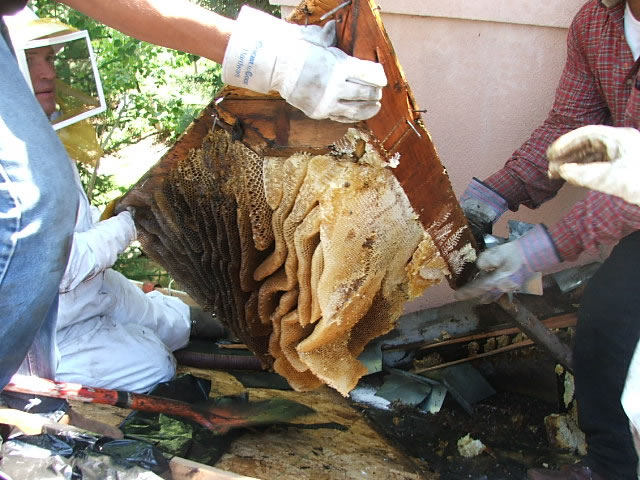 “Well, do you happen to know of a good honeybee removal service?”  The young, athletic, blond woman asked her two older visitors.  She and her husband had just moved into the neighborhood, and a couple of friendly ladies had stopped by to say hello.  She and her husband had gotten really lucky, finding this beautiful home for an extremely low price, in a well-established subdivision.  Sure, it was a home they bought directly from the bank, who had foreclosed on the prior homeowner.  Her new neighbors had filled her in on the details, including a prior homeowner who moved away suddenly, hadn’t said goodbye to anyone, rented the house out to someone, and then failed to make the mortgage payments even though he received rent.  His tenant got wind of that last part and quickly found herself another place to live.  Eventually, as happens all too often these days, the bank reclaimed the home, and sold it.

Unfortunately, since the home had been left vacant for several months, there were a lot of little problems with it.  Including the need for honeybee removal.  The new homeowner looked at her neighbors and asked their advice.

They thought they knew better, though.  They glanced at each other knowingly.  “Do you mean wasps?”  There had been a huge boom in the wasp population lately, and every homeowner in the neighborhood was fighting them off – spraying down children’s play sets, knocking down wasp nests, tending to those who were unfortunate enough to get stung.

Not wanting to offend her new neighbors, the young woman bit her lip and said, “Well, maybe.  But, they look an awful lot like honey bees.”  She grew up in a rural area.  She knew the difference between wasps and bees.  But, she humored her guests.  “Would you like to see?”

Good-naturedly, her guests agreed, although one suggested they take wasp spray with them.  She led them around the side of the home to a window and pointed up to a window on the second story.  Sure enough, honey bees were everywhere, swarmed around the window frame and disappearing inside the wall.  Her neighbors had never seen such a thing.  One of them realized her mouth was still open in shock.

“No, the bank sells foreclosed properties as-is, and we didn’t see this during our walk-though.  No one told us we needed honeybee removal.”

“Are they inside the house?”  Her astonished new friend asked.

“No, thank heavens.  But, I think it’s only a matter of time, don’t you?  I mean, with the new baby and everything, I don’t want to take a risk.”

“OK,” the oldest visitor exclaimed, taking charge of the situation.  I know just who to call.  Allstate Animal Control can send someone to take care of honeybee removal.”

“Wait, shouldn’t I call a bug removal service, instead?”

“Not with honeybees.  They’re special, protected, and have to be removed just so.  And, by the way, I’m so sorry I sounded so smug when I thought you were talking about wasps.”

“No problem.  You can make up for it by getting me the number for Allstate Animal Control so I can get them to remove the honeybees.”

“Mommy, why is my wall humming?”  Now, that’s a question you just don’t know how to answer.  Was my child’s head going to spin around next, or was something going to come bursting out of his bedroom closet?  I told myself I’d watched one too many horror movies and approached the wall, putting my ear up against it.  Sure enough, there was a noise in there.  I pulled my son’s bed away from the wall and gasped when I saw dead bees littering the floor.  “How do you get rid of honeybees?” I thought to myself and turned to my son.

“Well, sweetheart, I guess some bees got inside the wall.  Why don’t you go over to Alex’s house to play while I clean this up?”

I hoped I sounded more reassuring than I felt.  My son walked down the street talking about which computer games they were going to play while I called Alex’s mom.

“Ann, would you mind watching Braxton for a little bit?  I think there’s a honeybee hive in his bedroom wall and I’ve got to figure out how to get rid of the bees, and make sure it’s safe for him to sleep in his room tonight.”

“Sure thing, Alex loves playing with Braxton!  But, how on earth did you get bees in your wall?”

“I have no idea!  I didn’t even know we had any around here.  I mean, I’ve seen them around the bushes and backyard, but a hive?  In my house?  That’s just awful.”

“Well, let me give you the number of a company that’s done work for us before.  They’ll look at it for you and see what needs to be done.”

I wrote down the phone number for the company, thanked Ann and hung up the phone.  Out of curiosity, I went outside and walked around the back to look for myself.  There were large shrubs and flowers planted just outside his wall, and I’d assumed the bees I’d previously noticed back there were taking advantage of springtime flowers, not building a hive.  But now, I realized there were definitely more bees back here than anywhere else in the yard.  Carefully, I bent forward to investigate further, hoping I wouldn’t disturb any bees.  Sure enough, as I carefully pulled a branch out of the way, I saw several bees coming in and out of a small crack in the siding.  Something flew against my face and I backed off quickly and retreated into the house.

I made a quick phone call to the number Ann had given me, and then went to get the vacuum cleaner to clean up the bee carcasses left in my son’s room.  I knew it was better to get a professional out here, someone who knew how to get rid of honeybees safely, rather than try to deal with it myself.  Thoughts of bees flying around my son’s head while he was sleeping at night made me shudder.  It really was kind of like a horror movie.