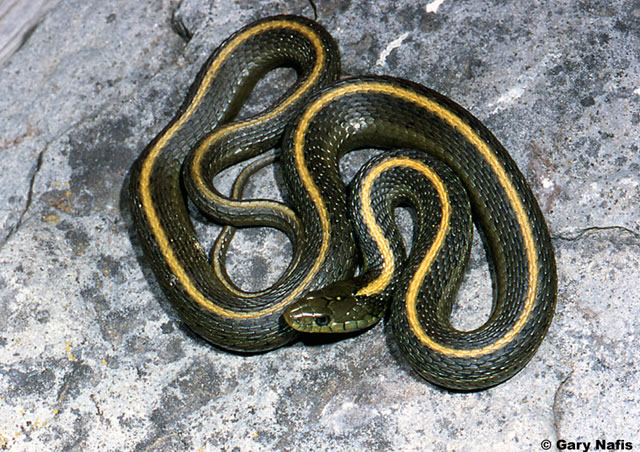 Snake removal?  I thought I was just playing with the best cat toy in the world!  The day started off mundane enough.  I slept for a long time while the family got up and ran around taking care of all of their business throughout the morning.  Then, after I’d napped for a bit, I stretched, jumped down off my cat perch, and sauntered over to the bowls of cat food and water that the family keeps filled up for me.  I ate my fill, and made one of the children open the door to let me out so I could take care of my own business outside.  When I was coming back in, though, I spied the best cat toy in the entire world on the stone walkway leading towards the backdoor.  There, basking in the warm late-morning sun, was a long snake.  All thoughts of afternoon naps flew out of my head as I crouched down and prepared for my first strike.  I have to admit, I wasn’t thinking of snake removal, just of the hunt and play that lay before me.

It didn’t realize I was even there at first.  I think it was in a stupor, enjoying the feel of the sun-warmed stone walkway.  It was almost too easy, so I took a quick swipe at it.  All I wanted to do at first was get it moving, so I could play.  It moved, all right!  Every single muscle in its thick snake body was writhing and twisting.  That snake bounced from the far side of the walkway to the wall on the other side and back again before I took another jab at it.

My second jab sent it into a further frenzy, as it desperately tried to get away.  Now, it was getting interesting.  Once it realized I wasn’t going away and there was no easy escape, it tried to strike back, coming right at my face with its fangs.  I’m a cat, so I easily avoided the attack, leaping straight up in the air and flipping over backwards.  It twisted around and struck again, getting only a mouth-full of air.  This was fun!

In the midst of this play, I noticed my family out of the corner of my eye.  They’d come out to watch the event.  I worried at first that they’d be upset and try to chase me off, or get rid of the snake.  But, instead, they just watched with their camera.  They must have thought I was the best snake removal tool in their arsenal.  I am, but first I must play.

Turning my full attention back to the snake, I noticed it had made its way back to the wall and was climbing it pretty quickly.  It must have assumed it would be safe once it reached a certain distance.  True, but I didn’t intend on it making it that far.  Leaping up, I batted it back down, and it tried to bite me again as it fell.

I took a breath and circled once more, as it coiled itself up tightly into a little snake ball.  It had realized its efforts at escaping and attacking were both futile.  But, an immobile ball of snake is no fun.  And, snake removal is so much more fun when I get to toy with it for a long time.  But, it was not to be.  Before I knew it, my family shooed me off and got rid of the snake without my help.  Well, there’s always next time.