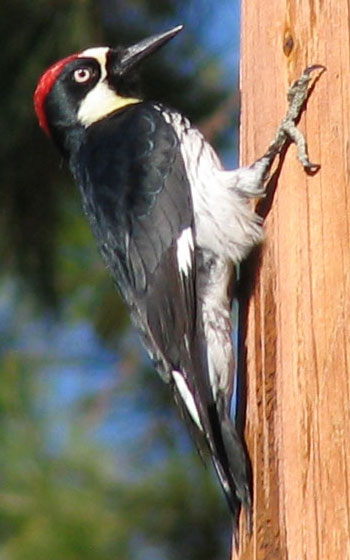 I would have expected cats to be great at woodpecker removal.  I was wrong.  At least with our cats.  They are no help whatsoever.

We’ve lived in this house for eight years, and for five of those years we’ve had problems with woodpeckers.  I have no idea why they’ve chosen our house to attack.  Our home is pretty much like every other home on our block full of stucco- and brick-faced two-story houses.  The neighborhood is almost a decade old, and you can still tell which houses were built first by looking at the height of the trees in each yard.  We’re a subdivision with young trees and lawns still struggling to establish dominance over weeds.  So, I can’t figure out what would attract woodpeckers out to our little area of the world.  I assume they would be more interested in well-established neighborhoods, with lots of tall trees and foliage.

But, we have struggled with woodpecker removal nearly every year.  For some reason, our house gets attacked every spring.  By the end of the summer, we’ve patched up a lot of woodpecker holes and inspected our attic to make sure nothing else has crawled inside.  Many mornings, we wake up early to the drum-drum-tap-tap of a woodpecker drilling holes into our beloved home.

We’ve tried a lot of things, from the ugly giant plastic owl screwed onto our roof to spraying the birds with water anytime we hear them out there.  They ignore the owl and return once the water has dried.  Don’t tell anyone, but my husband’s gone out there with the air gun and shot pellets up at the birds in an effort to scare them away and let them know we mean business.  They still come back.  It’s like they know they’re protected under the law and my husband isn’t allowed to kill them.

And our cats are worthless at woodpecker removal.  The birds ignore the cats chattering and mewling on the ground.  I would have expected, however, that they would have at least kept the woodpeckers out of our house.

So, you can imagine how surprised we were when we walked in the house to find a woodpecker sitting on the kitchen floor.  It flew up onto a high plant shelf once it saw us, and then eyed us, irritated.  Our two cats were nowhere to be seen.  When we looked for the cats later, we found them sleeping soundly on our forbidden bed, happy as can be.

I called Allstate Animal Control and we had a woodpecker removal technician come out to the house.  He admitted he’d never seen something like this happen before, either, but the woodpecker just sat there, on the plant shelf in my kitchen, watching us, proof that the unexpected does happen.  And, proof that cats are worthless at home protection.