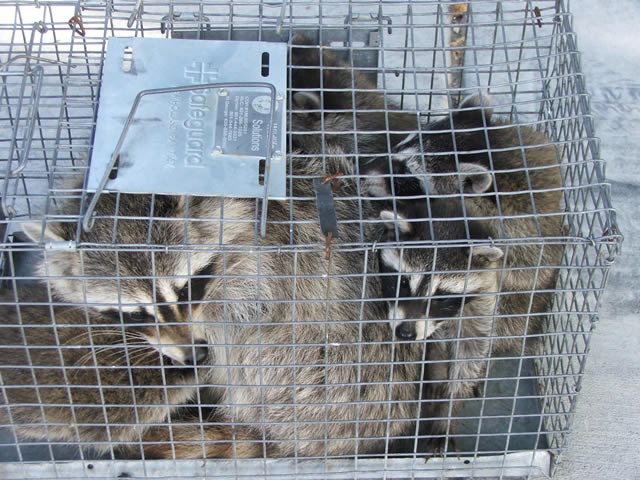 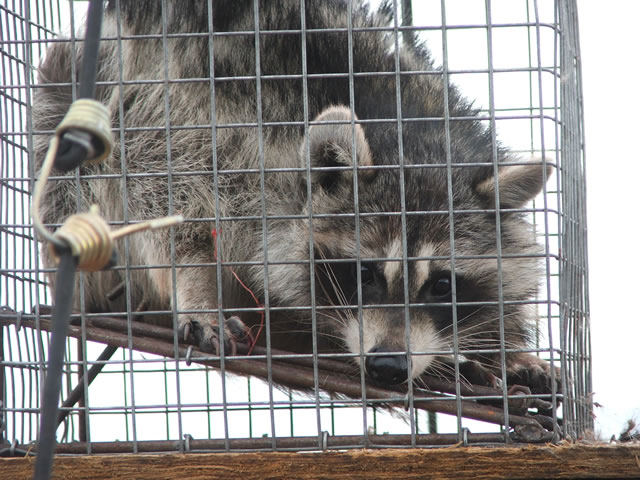 Mama Raccoon says I don’t know anything about the world, but in my whole life of two weeks, I’ve learned a lot about raccoon control.

Mama loves to tell us the story of how she hunted high and low for the perfect place to have her perfect little babies.  My two sisters and I are, of course, perfect.  Before Mama had us, she walked through the forest.  She found a big log that was hollow and would protect her babies from the rain, and thought that maybe that would be the perfect place.  But, there was already a little family of skunks living in there, and she almost got sprayed by Mama Skunk, so she got out of there.  Then, she found an abandoned car with soft seats filled with wonderful fluffy stuff that she thought would be perfect to keep her little babies warm.  But, there was a nest of rats living in there already, and she didn’t want her babies to get bitten by nasty little rats, so she moved on.  Then, she found a little area under some stairs right next to a big bowl of cat food, and she thought it would be a good place to have her babies, because it would be so close to food.  But, some people tromped up and down those stairs all the time, and she was scared they would get raccoon control out there and take her away.

Finally, she crawled up and up onto a person house, and looked through a little crack in the roof above a porch.  It was indoors, so it would keep her babies safe from the rain.  It was filled with fluffy insulation, so it would keep her babies warm.  It was close to a woodpile just outside, under which lived delicious little mice.  And, no people went up there all the time, so she thought she would be safe from raccoon control.  It was perfect.

So, Mama made that little crack into a big, big hole so she could get up in the roof over the porch.  She is very strong, so she just pulled back the roof and tore into it until she could safely get inside.  Then, we came along, and Mama was very happy.  Sure, we stained the fluffy insulation, and sometimes we were noisier than we should have been, but mostly it was a perfect little life.

Until, one day, a man heard us moving around up in our perfect little home.  We heard some metal scraping on the concrete below, which turned out to be a ladder.  The man poked his hand up inside.  In his hand was a bright, bright light, and I wanted to get closer.  Mama picked me up in her hands and held me close to her, and she pushed my sister and brother back behind her.  Then, she went up to sniff and growl at the light.  It went away really quickly, and we thought we were safe.  But, a few hours later, raccoon control showed up and we were taken out of our perfect place one by one.  Mama says she’ll find us another perfect place for us where we won’t bother people anymore.

Who would think of removing raccoonsfirst thing in the morning??

The comforting smell of fresh brewed coffee makes it way through the house in the early hours of the morning.  Alarms are softly buzzing in different bedrooms.  Everyone is sluggishly moving about their morning routines, getting ready for the hustle and bustle of a normal day.  Someone turns on the TV while Mom is scrambling eggs.  Talk centers around homework, after school activities and what the general schedule is for the day.

Suddenly, someone says, “Shhhh, shhhhh!  Listen!”  Everyone stops talking and looks awkwardly at each other while trying to figure out what they’re listening for.  “What . . . “ Dad says, but he’s quickly shushed.  There, softly, everyone hears it.  A quiet scrabbling coming from right above their heads.  Then, a small squeak.             Someone volunteers to run outside and see if there’s anything on the roof, but nothing is spotted.  The scrabbling reoccurs.  Dad sighs.  “Must be something in the crawl space.”

Dad gets out the ladder, grabs a flashlight and climbs up into the small hole in the ceiling.  He shines the flashlight around every corner, and almost misses it, but there!  A shiny flash of eyes staring back at him from above the kitchen.  One set of eyes?  No, more.

Dad comes back down the ladder where everyone else is watching expectantly.  “We’re going to have to get help.  I think there’s raccoons up there.”

Everyone bursts into exclamations.  “How did they get up there?”  “Why our house?”  “Come on, Dad, you can get ‘em!”  But, Mom walks over to the computer, gets the number for removing raccoons, and calls.

When the raccoon removalserviceman arrives, he verifies there’s a mother raccoon and her pups up in the attic.  They’re nesting on the opposite end of the house, far away from the crawlspace access, so he suggests the best way to remove the raccoons is to cut a small hole in the ceiling close to their nest.  He’s going to reach in and remove them one by one.

Mom’s worried about the mess.  Dad’s worried about having to patch up the hole afterward.  But, they decide messes can be cleaned up, holes can be patched, but those raccoons must be removed.  The small hole is cut.

The brave serviceman climbs up a ladder, wearing heavy gloves and armed with nothing more than a mirror.  The mirror lets him see where the raccoons are.  He looks, retracts the mirror, and sticks his arm up into the hole.  A short time later, one pup is removed.

“AWWWWW!” says everyone, including Dad.

One by one, the adorable raccoon pups are removed and placed carefully into a bag.  Soon, the bag is wriggling and squeaking.  Although these are pests that have invaded their home, the family can’t get over how cute they are.  Still, they’re happy to have them out of the house.

Removing mamma raccoonisn’t as easy.  It requires a specially devised noose, but she’s removed, spitting and growling and unhurt.  She’s carefully loaded into the truck, along with her pups.

All of a sudden, the house is quiet again and the family goes back to their routine activities.  They still love talking about their little raccoon family!