We’ve tried everything to get rid of the raccoons in the attic, but at this point it seems impossible.  They’ve been there for what, a couple of months now?  I can’t pinpoint an exact time because we actually didn’t know they were there until a month or so ago, which is when we first saw the mother raccoon go into the attic.  Before that, we just heard the occasional bumps and creaks that we gave the old house credit for.  We would have been none the wiser if our neighbor’s cat hadn’t gotten into a tiff with the raccoon, leaving us to investigate the commotion and catch the raccoon crawling through a gap in the soffit.

After that we listened carefully to the sounds from above the ceiling, and it became fairly clear to us that there was more than just one raccoon in the attic, she had babies, so we started to do our research.  Anything we could think of we looked up: how to get rid of raccoons in the attic, trapping raccoons, the most effective raccoon removal methods; all of it.  After we made a list of possible solutions, we started to check them off one at a time.  We turned the lights on in the attic, we started playing loud music during the day when we were gone, we set traps outside where we thought we might catch the mother, and we even put ammonia soaked rags up there with a fan to blow the smell around.  We took every step possible, and we thought it had worked.

Not long after we had started harassing the raccoons, I saw the mother leave the attic with what looked like a baby in her mouth. We were ecstatic! After we celebrated for a minute, my husband went out and sealed off the gap we saw her entering and exiting through.  We went to bed happy that night, thinking all was well.  Of course, happy endings are for fairy tales and the next night the raccoon came back, tore the soffit open again, and has been hiding out there for the last 4 days (she hasn’t left once).  We can’t hear any babies anymore, but we don’t know what she’s doing up there and we have nothing left to try.  Please, we need some serious help to get rid of the raccoon in our attic, I can’t keep doing this. 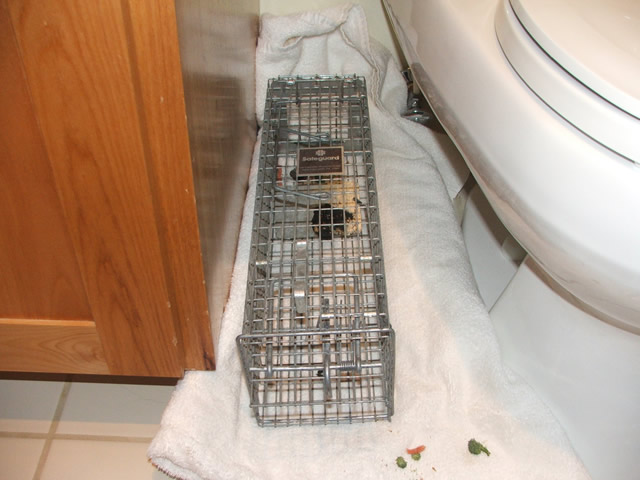 My husband and I have been debating this last week on the size of rat poop.  I’d like to think we were more high-brow than that, indulging in political discussions or loving debates over social issues.  But, no, it’s been about the size of rat poop, and now our three sweet and precocious children have joined in the discussion.

One morning, several days ago, I sent my husband off to work and my kids off to school as normal, and started in on my daily routine.  I clean the kitchen, wash the dishes and retire to my home office to dial into work.  After clearing off the breakfast table, I grabbed a broom and swept the floor underneath.  That’s when I noticed hard, little black pellets littering the floor.  At first, I didn’t think anything of it, but when I bent to sweep everything into the dust pan, it suddenly occurred to me to wonder, “What does rat poop actually look like?  Is this it?”

I got really upset at the thought of rats in the house.  I work really hard at keeping a clean home, despite three very active children.  I’m not saying it’s perfect and spotless, but it’s clean and sanitary, and I’ve always prided myself on an exceptionally clean kitchen.  So, why on earth would I find rat poop under the dining table??

The pellets were different sizes – some round, some oval, but they were all the same dark color, and I could tell they were the same consistency as they rolled around in the dust bin.

Disturbed, I told my family about it that afternoon as everyone came home, and I begged them all to be careful not to leave any food out.  I assumed my husband would have no issues with me calling in a rat exterminator, but he called the whole experience into question, asking me if I even knew the size of rat poop, or what rat droppings look like.

My eight year-old daughter raised the question of why I was so sure it was a rat.  Maybe it was a mouse?  My eleven year-old boy sided with his father, saying he thought rat poop was more uniform in size and shape.

I admit, I got exasperated.  In my mind, I was sure it was a rat and I was going to battle it until we had gotten rid of it.  Over the next couple of days, I’d find more black pellets.  I’d show the entire family and the discussion over the size of rat poop would rage on.

One night, the mystery was finally solved and the discussion put to rest.  It was late, and I noticed the light on in the kitchen.  I padded downstairs, thinking we had just forgotten to turn off the light before going to bed.  That’s when I saw him under the table.  My 6 year old son, who had remained fairly quiet in our family discussion of what rat poop looks like and the size of rat poop, was sitting cross-legged on the floor.  In his hands, he held a stale chocolate cupcake from a batch I made on Sunday.  Apparently, he’d squirreled some away, and snuck down each night to nibble on them while hiding under the table.  My “rat droppings” turned out to be chocolate cake crumbs.