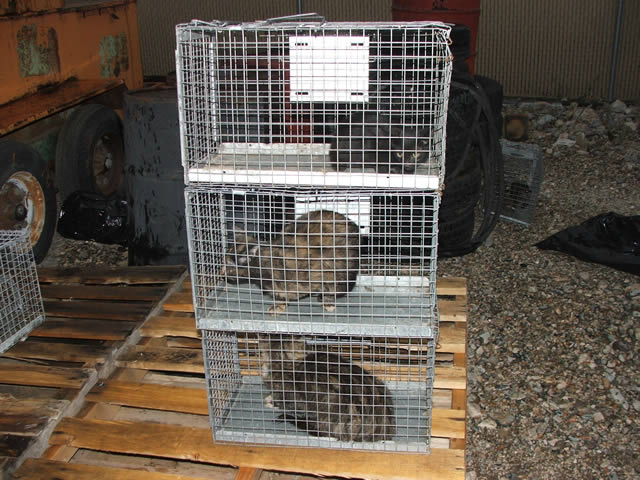 My owner just has to understand she needs to get rid of feral cats.  If I’m going to be labeled an “outside cat,” then I gotta be safe.  I gotta make sure my food bowl belongs just to me, not to any old cat that wanders by.  I need to stay healthy, which means these mangy feral cats shouldn’t infect me with their nasty little mites and ticks and other tiny creepy crawlies.  And, my bed.  Oh, my bed is mine.  But half the time I have to chase one of these wild cats away from my own bed, and I’ve gotten scratched and bit more than once.  Imagine, my precious, silky fur and skin marred by a wild cat’s scratch.  Yep, my owner has got to get rid of feral cats.

The day my owner decided enough was enough and made me an “outdoor cat” came as a complete shock to me.  So what if I scratched up her new leather couch?  Isn’t that why she bought it, so I could keep my claws nice and sharp?  And, I really did think the litter box was optional.  Sometimes that corner on the carpet, right by the fireplace, was the most convenient and comfortable place to relieve myself.  She let me get away with all of that for a while, and then HE came.  Some complete stranger that made her get all lovey-dovey.  He would be fine over at our house for a while, until he started sneezing and wheezing and sniffling and chuffing.  What was his problem, anyway?

One day, after an innocent little “marking” incident in her closet, my owner just set me out.  I guess she just can’t take it.  She set me up pretty nicely, though.  As an outdoor cat, I get a little more freedom, she got me a nice cozy and secure bed, and she makes sure to set food out for me twice a day.  I miss curling up on her slippers, or the warmth of the bed, or jumping up on the kitchen counters.  But, the outside life isn’t so bad.  That is, except for the neighbors.  We have just got to figure out a way to get rid of feral cats so I can enjoy my territory without fear of finding one of them curled up in my bed or chomping on my food.

I thought I could get rid of feral cats on my own.  I marked the perimeter of my territory, and spent several nights fighting with them to scare them off.  But, there are a couple of them that keep showing up.  It’s annoying to fight them off of my food dish or out of my sleeping box, but I’m afraid I’m going to end up really sick or injured one of these days.

It’s definitely time my owner get Allstate Animal Control to get rid of feral cats.  Then, I can go back to destroying, I mean enjoying, my owner’s home all by myself.

There’s a reason I wear thick jeans when I go to work as a feral cat control officer.  Some people prefer loose-fitting khakis with lots of pockets, or shorts when the weather gets really hot.  I didn’t normally discuss the fashion choices available to feral cat control officers, until the incident.  Now, I bring it up with all the new guys, just so they know what could happen to them.

The day of the incident was an extremely hot day, but our washer had broken down and my shorts and khakis were both in the wash, so I was stuck with wearing thick jeans with the brown animal control shirt my company has issued to us.  Grumbling, I headed into the office, grabbed a cold soda out of the machine and picked up my assignments for the day.  It was going to be a pretty easy morning, it looked like.  I had a nice, air-conditioned drive ahead of me out to a more remote area where someone wanted feral cat control to trap a stray cat that had been spotted in the neighborhood.

So, I stopped grumbling, hopped in the truck and headed out.  It was an hour and a half drive, and I was relaxed and in a good mood when I finally pulled up to the client’s house.  He explained that the reason he’d called for feral cat control is because a white cat had been roaming the neighborhood, getting into people’s garages, attacking people’s pets, and using his own backyard as its personal toilet.  He’d had enough and wanted feral cat control to get rid of the cat.

I went about setting up a trap in an area the client pointed out to me.  Apparently the cat preferred living in and around a wood pile in his backyard.  Fortunately, as soon as I started setting up the trap, I spotted the cat watching me.  Slowly, I reached my gloved hand out, making soft mewling sounds, and the cat immediately approached me, sniffing my hand.  Quickly, I snapped it up and held it in the crook of my arm to secure it while I grabbed a collar and leash that I carry with me.  I was surprised at how easily I got the collar and leash on it, and even more surprised that the cat started to purr and exposed its neck so I could pet it.  It was very sweet, and I wondered if it truly was a feral cat, or if it had been a domestic cat dumped out here.

I didn’t have to wonder long, though.  Suddenly, without any warning, the cat leaped up onto my shoulder, and then clawed its way down my back.  I twisted around to let it jump safely to the ground, holding tightly onto the leash so I could regain control of this wild cat.  It went up on its hind legs, hissing and spitting and clawing at the leash holding it captive.  But, when it finally realized it wasn’t going anywhere, it went on the offensive.  It ran around my leg three times, shortening its leash as it did so, and then grabbed my denim-clad leg, clawing its way up, up, up until its claws sunk into my thigh far too close to my unmentionables.  It hung there, tenacious, as I gasped and grappled with this wild animal.  Finally, I was able to tear it off my leg and get it into the trap and then into the truck.  I had to sit in the truck for about ten minutes until I regained enough composure to let the client know I had gotten rid of the wild cat.

And, that is why thick jeans are now an official part of my feral cat control uniform.  I will never wear anything else.