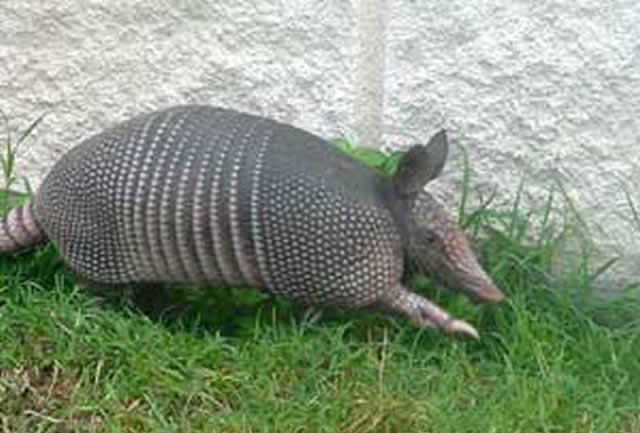 As a recipient of many, many boring videos from Grandpa, I’m so grateful he and Grandma now have armadillos in their yard.  Grandpa retired about five years ago.  It almost drove him crazy, and it almost made Grandma homicidal.  Grandpa is the kind of guy who just wasn’t cut out for retired life.  He needs to always have a project, a hobby, ways of filling up the hours of every day.  He was born towards the end of the Great Depression, and his parents were extremely hard working, frugal people. So, that’s how he grew up.  He worked hard his whole life, threw himself into whatever he did.  He was an engineer who helped build water systems for cities, pipelines and dams.  Even though he had a demanding job, he would come home and spend hours working in the shed, tinkering around with one thing or another.

He didn’t want to retire, either.  But, Grandma was tired of moving around from city to city every few years when an engineering project was complete.  She wanted to live near her grandkids.  So, after a few years of back and forth between the two of them, he retired.  His eyesight had already started to fail him, so tinkering around in the shed or work room became more and more difficult.  He drifted aimlessly around the house, getting in Grandma’s way, and starting one project or another, and then losing interest in it.  He needed a hobby, and he needed one soon, or things could go horribly, horribly wrong.

My Dad got together with my aunts and uncles, and they all decided to chip in and buy Grandpa a new video camera for his birthday.  He loved it, and started filming everything.  One of my cousins got the not-so-bright idea to show Grandpa how to edit the films and email them.  Soon, our emails were flooded with videos showing Grandma planting tulip bulbs, the dust in the chimney (seriously, we got a video about dust), and videos of photo albums.

Then, the day arrived when Grandpa discovered armadillos in the yard.  It gave him an interesting subject.  He documented the scrapes the armadillos made in the grass.  He lay in wait until they came out and filmed them scuttling around the yard, foraging.  He showed how they lived under the stairs.  They even came right up and sniffed his boots, and he got that on film.  Of course, he had to explain that he was sorry the lens cap was in the frame, but the camera was pointed straight down and there was nothing he could do about the dangling lens cap.

Grandpa’s editing techniques leave a lot to be desired, and certainly his narrative could be livened up.  However, with the armadillos in his yard, at least his subject is a lot more interesting.

A new puppy and an armadillo on the lawn do not mix.  It’s getting to the point where I hate both.  I’ve always considered myself an animal-lover, but this new drama between a rowdy puppy and a destructive armadillo on my lawn at two in the morning is starting to take its toll.

We already have a small dog who prefers to stay indoors as he is aging, but as he gets older and more sick, he prefers to be left alone.  I had the not-so-brilliant idea that we should get another dog, a puppy that could grow with the kids.  The children could play catch with it outside, I’d get more exercise as I took the dog out for walks, and it might ease the imminent trauma of losing our current pet.

So, we got a boxer/terrier puppy mix.  We found him at the local shelter, and I could not believe how beautiful and friendly he was.  Then, we took him home.  He is a forceful ball of non-stop energy.  He makes the children happy, when I feel he’s safe enough for them to play together.  Most of the time, he just tries to chew everything and everyone in a playful way.  He’s like a small tank with happy genes, and he never stops.

You can imagine, then, the racket that woke us up the other night when our puppy discovered an armadillo on the lawn.  It had already been a long day at work and with the kids, and I didn’t get to bed until late.  When the puppy started barking sharply and constantly, it woke us all up, including our ornery old indoor dog, who started howling, angry at being disturbed.  I felt his pain.  If I could have howled, I just might have.

I threw on my robe and slippers, and rushed outdoors, trying to quietly yell at the dog to shut up so I wouldn’t wake up whichever neighbors had managed to sleep through the earlier noise.  It took a while for me to understand why the dog was so noisy.  We had an armadillo on the lawn.

The puppy seemed satisfied that he had done his job, and finally hushed up, but he still chased the armadillo around the lawn.  As soon as the puppy approached the armadillo, it would jump straight up into the air, and run in a different direction, surprisingly agile.  If I’d been watching a video of it, I’m sure I would have laughed at the antics of both creatures.  Since it was two in the morning, I was annoyed, embarrassed and cold, it wasn’t as funny.  It became even less amusing when I saw the holes the armadillo had scratched in the lawn.

I’d hoped the armadillo in the lawn would be too scared to return, but it has returned several nights in a row, taunting my puppy.  I’m done with the drama.  Let Allstate Animal Control get rid of the armadillo on the lawn, and let a trainer teach my dog some manners.  Then, maybe, life will be a little more normal.