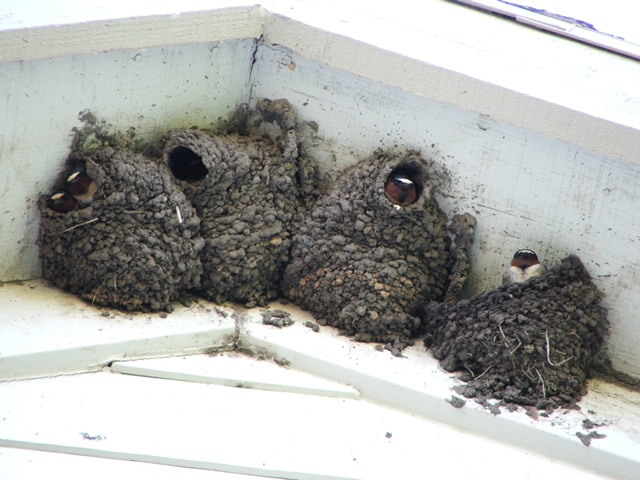 I know it’s an irrational fear, but I’m very much afraid of the swallows on our house.  Some people are afraid of heights, some people are afraid of water.  I am afraid of birds.  They call it ornithophobia, and apparently it’s pretty common.  Some people are terrified of large birds of prey, but I can’t stand any bird whatsoever, large or small.  I don’t overreact, for the most part.  When I have a run-in with a bird, I freeze, get the sweats, and then, depending on the situation, I might run away screaming like a fourth-grade-girl chased by a boy with cooties.  Like I said, I don’t normally overreact.

We have a skylight in our second floor, which I’ve absolutely loved.  I was lying on the couch underneath it, staring up at the sky, trying to think through a problem at work.  That’s when I heard it.  It was a small sound at first, but enough to jolt me out of my brainstorming.  Something alive was restlessly stirring around over my head.  Then, something brown, with pointy wings, flew over the skylight, directly above me, joining whatever creature already occupied my roof.  Some part of me detached from my knee-jerk fear reaction, and the rational part of my brain analyzed what I had just witnessed, causing me to realize there were swallows on my house.  The irrational part of my brain wanted me to throw things at the ceiling to scare them away, and then hide in a fetal position in a closet until the disgusting things were gone.  I’m a grown man.  I rejected the desire to flee to the dark protection of the nearest closet.  Instead, I ran out of the room calling for my wife.  I thought I used a very normal tone of rational voice to call her name.  She says I squeaked and croaked something unintelligible.  Whatever I said, and however I said it, she did come running right away.

I somehow managed to communicate the reason for my flight, and she walked in the room to investigate.  Sure enough, we had two swallows on the house, and it looked like they were building a nest.  My loving and supporting wife laughingly suggested I climb onto the roof to take a look for myself.  In response, I looked up the contact information for Allstate Animal Control and made an appointment for someone to come and take a look for me.  For the first time since spotting the revolting things, I was relieved.  Someone was going to remove the swallows from my house.

It might be a while before I can relax under my skylight again, though.  I won’t even try to analyze why I’m so afraid of birds, but one thing’s for sure.  I refuse to allow any bird, including swallows, on my house.