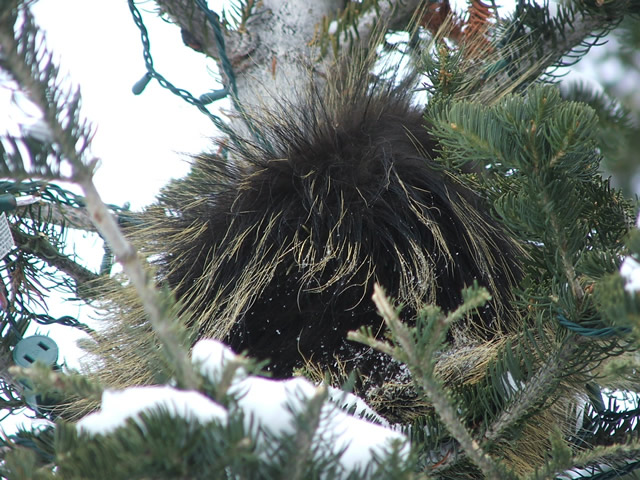 I think the porcupine believes that if we can’t see it, we won’t suspect we need porcupine control.  We have a porcupine that loves our yard, our trees, our shed, even our car.  And, for some reason, it believes it has a better chance of getting to stay on our property if it plays hide and seek with us.

At first, this tactic worked very well.  We didn’t suspect we had a porcupine control problem.  We had other explanations for some of the damage we found.  Our makeshift plywood door on our shed had a large hole chewed right through the bottom right-hand corner.  We thought it was raccoons.  We found holes scratched into our sod, and assumed we had opossums or maybe rabbits.  The undercarriage of my husband’s truck had scratch marks and a tire had been chewed on.  Again, we blamed raccoons.  For over a month, we were on the lookout for a couple of raccoons.  We were certain they lived in the nearby woods and had probably found a hollow log or other nice place for a den.  We even picked out names for them, in case we ever saw them.

So, the porcupine’s ploy worked.  We weren’t on the lookout for a porcupine.  It had found some perfect little hiding spots throughout our yard, and stayed well out of sight.  For a while, all we ever saw was the damage, and we blamed other animals.

One Saturday morning, we must have startled the porcupine, though.  It was going to be a warm day, and we had a lot of yard work to do, so we had decided we’d get up early, get it done, and then enjoy the hotter hours of the day at a cool movie theater, followed by an air conditioned restaurant.  We went out into the yard, pulled out our tools from the shed, and started working.  I was digging up some weeds when something bounced off my head.  It was a piece of bark from the tree I was working under.  I looked up, and couldn’t believe what I saw.  A porcupine clung to tiny branches far above my head.  As far as hiding spots go, that was genius, I have to admit.  Who looks for a porcupine up in the tree?  But, there it was – a fat little cumbersome body, its quills laying flat, little paws clutching the tree, and a mouthful of bark that it had obviously stripped off the tree on the way up, as a snack.

I called my husband over from where he was working on the opposite side of the yard, and he didn’t believe me, until he saw it for himself.  It explained all the damage in our yard – the shallow holes in the grass, the chewed up door to the shed, the trees with pieces of bark stripped from them, and even the chewed truck tires.  That’s a lot of damage for one porcupine, assuming, of course, there weren’t more porcupines playing hide and seek with us.  We called porcupine control and went back to our work, letting the porcupine enjoy his last moments far up in the treetop.