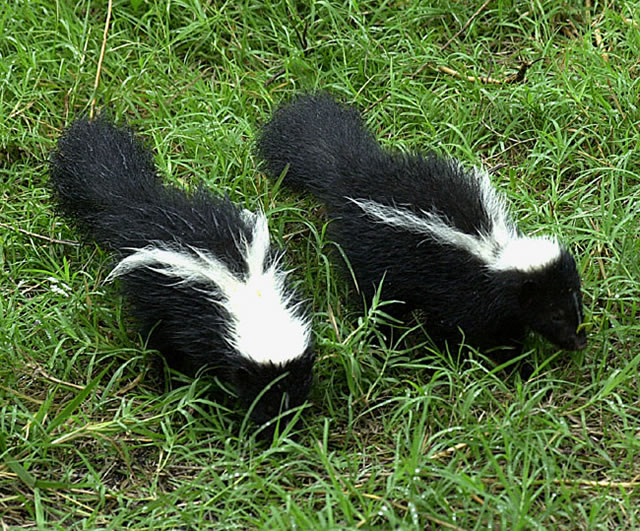 Thinking of ways of how to get rid of a skunk is just not something you want to do while running at five-thirty in the morning.  But, in my neighborhood, you’d better give it a little bit of thought, for your own safety.

Around the end of April, my scale and an upcoming trip to the beach reminded me of my New Years Resolution to get fit and trim down.  I spent a lot of time calculating how many calories I needed to burn each day to make my beach trip something more than a Mumu-fest.  I invested in a great pair of running shoes, planned out a route, got a lot of great tips online, and decided which the day I would begin my valiant efforts to get fit.  I figured the best time to get running into my schedule was to go early in the morning before the kids woke up.  So, I also bought a small light to wear on my hip, to alert the few possible drivers of my presence.  A crash diet was possibly in order, but having a car crash into me wasn’t.

I went to sleep early and excited about my new routine, and woke up angry at the vicious alarm clock and moaning about the indecency of running while it was still dark outside.

But, I did it.  I started my routine, and after about a week and a half, it got a lot easier.  I didn’t moan as loudly when I woke up, and I finally stopped swearing at the alarm clock.  My breathing was getting easier and I was almost able to run a full mile without stopping.  And, if I was truly honest with myself, I enjoyed running while it was still dark outside.  I felt so virtuous, thinking of myself as a “hard core” runner, alone and free out there in the dim pre-dawn.  It was the only quiet time I had each day, and I was beginning to actually enjoy it.

I heard a sound, and then the light on my hip caught a flash of something moving just ahead of me.  I couldn’t make out quite what it was, but it was large enough to make me stop.  Adrenaline pumping, I tried to calm my breathing and squinted, grabbing at the small light.  It moved again.  A cat?  Noooo, what is . . .?  Then my mind finally put it together.  Skunk!!!  Rooting around in someone’s garbage.  Long nose, bushy tail, and of course the white stripes on black fur.  If I hadn’t stopped, I would have run right next to it, probably startling it enough to spray me.

I backed up slowly and eased over to the other side of the road, warily watching the black shape moving around.  As long as it didn’t turn its tail towards me, I was okay, right?  Unless it was rabid?  No, probably not rabid or it would have charged me by now.  Right?  Maybe?  How many days had I run right by it?  Where was it living?  How do I get rid of a skunk in my neighborhood?  My stomach churned, thinking of how I might have been sprayed before I even knew there was a skunk in the road.