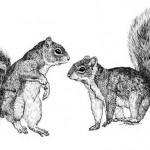 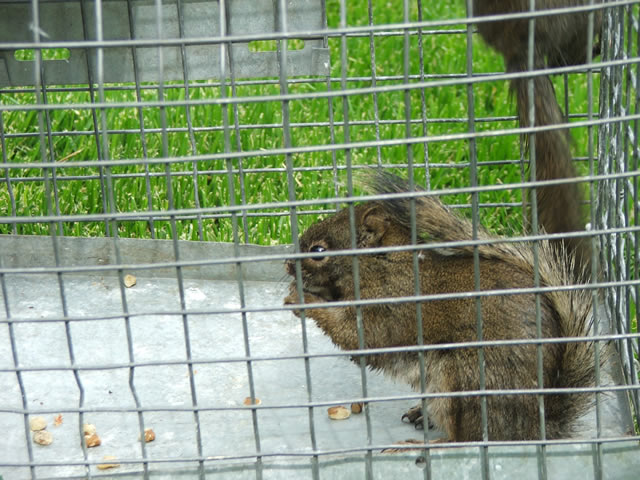 All right, some bizarre or perverse people will do some really weird things with a dead squirrel, in the name of “good, not-so-clean” fun.  They’ll put them in shadow boxes, stuff them and set them up in little scenes, strap them to the hood of their car, take funny pictures, throw them at other people, and one company’s even made beer bottles out of them.  It’s enough to make you shake your head and wonder about humanity.

But, when you have a dead squirrel rotting away in your walls, it is no laughing matter, and you really don’t care about the state of humanity.  You just want that dead squirrel removed as quickly as possible.

Maybe the squirrel got into the attic by chewing a small crack in the soffit just a little bit wider, or squeezing through a small hole next to a vent that wasn’t sealed properly.  Most species of squirrels have several dens in their territory, and that can include your walls, your attic, your chimney, or wherever else looks like a nice, warm and protected space.

Once inside, the squirrel found the joys of insulation, which doesn’t irritate its skin the way it irritates ours.  Maybe you’ve got some personal property stored up there, and it gnawed its way through a box and went exploring through your stuff, urinating and defecating wherever it pleased and stealing things to use for its nest.  It has to constantly chew on things, and plastic boxes, wiring, soft metals, cardboard, and wood are great materials for it to use to file its teeth down.

Squirrels love to explore, and it ran all over your building, chewing, contaminating, investigating.  Then one day, it went the way of all living creatures and passed away in a wall space.  You didn’t even know the dead squirrel was there, until the smell in that room got stronger and stronger and bad and then worse.  Maybe flies found it quickly and laid eggs, which developed into maggots, which then became flies, and now you have a fly problem in your building.  Maybe it’s just the odor of decomposing flesh that’s overpowering you.  Maybe there’s more than one dead squirrel rotting away in there.

Suddenly, stuffed squirrels posed to look like they’re doing the cha-cha isn’t so charming anymore.  You want that dead squirrel removed and quick, and you want to make sure you don’t have any other squirrels living inside your building.  That’s when it’s time to contact a wildlife removal professional.  They can take care of the problem for you, and then maybe you can book a vacation to tour the museum full of dead squirrels posed as famous Americans.  Hey, whatever tickles your funny bone. 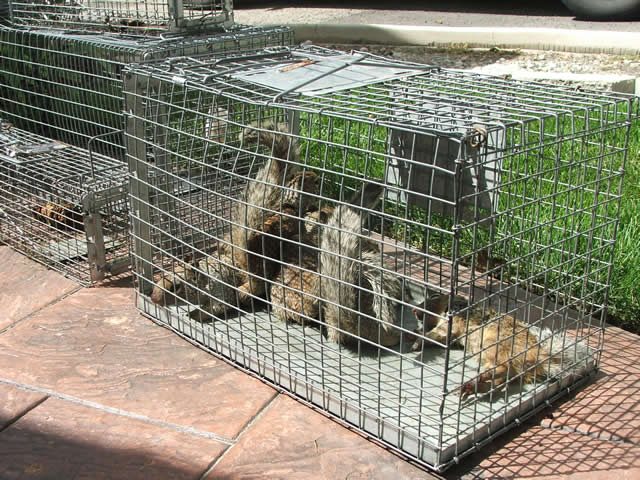 Times are tough enough without me having to get rid of squirrels from our attic.  My company made me cut back on my hours so that I’m home more and make less, but hey, at least I still have a job, you know?  So, I’m home, and I’m working on the computer looking for some extra work to fill in the gaps, when I hear this noise overhead, coming from the attic.

I try to ignore it for a while and make a couple of phone calls.  But, after a while, the rustling, the running, the pitter-pat just drives me crazy.  I stand on my chair and pound on the wall.  It’s quiet for maybe ten seconds, but then starts up again.  I bring in my dog who barks at the ceiling, but the squirrels don’t even care.

Finally, I crawl on up there, and wouldn’t you know it?  There’s squirrel mess everywhere.  They’ve even gnawed up some of the wood up there, and left a scattering of their droppings.  It could be worse, I guess, it could be something really filthy like mice or something, but squirrels are bad enough.

I go outside to see where the squirrels are getting in, and finally find a couple of holes right up under the eaves.  That’s gotta be it.  So, I make a trip to the hardware store, figuring I’ll just plug up the holes, clean up the mess, and that’ll be that.  Good thing I got to talking to the guy there.  He told me I could plug up the holes, but if the squirrels had babies in there, I’d just get a worse problem.  If I make it so mama squirrel can’t get back in to her babies after a long day of foraging for food, she’d do anything to get in there.  She’ll tear through the stucco and wood and make an even worse mess for me to repair.

So now what?  I’ve got to wait for the babies to grow up and leave the nest?  How long would that take, and why should I have to deal with listening to the annoying rustling sounds above my head, knowing some wild creature and her babies are up there?  Plus, we store stuff up there, and I don’t want them rummaging around in my stuff.  No, it’s time to get rid of squirrels and now!

I consider myself a do-it-yourself kind of guy, but this was all kind of new to me.  What do I do?  Poison?  Set a trap?  What’s legal and what’s not?  I have no idea.  It’s not like they teach you this kind of thing in high school shop class.  It’s just not worth the hassle, I think.  It’s definitely time to call a professional.  Once they get rid of the squirrels, I can plug up those holes and that’ll be that.  Maybe I can learn how to do it right, and find a job with the pest control service?  Who knows, these squirrels might be a blessing in disguise.

Preparing for an important upcoming business meeting is certainly not the time to think about squirrel removal.

I was starting to become the office joke – the woman obsessed with the idea a squirrel was in the ceiling above her office. “Maybe it’s a ghost,” one co-worker offered, snickering. “Are the voices talking to you again?” another one joked.

“Haha, maybe you’re just jealous because you have to work downstairs and I have a nice office with a view?” I countered, lamely.

Truth was, the squirrel was starting to drive me nuts . . . pun intended.

I was one of the first employees in the building every day, and I’d walk up the central flight of stairs to my second floor office. My space didn’t really have that great of a view, and only one very small window, but it was still one of the better offices in the building. I enjoyed tackling my stack of paperwork early, when the phones weren’t ringing and no one was giving me more work to do.

One morning, as I scooped my yogurt into my mouth while looking over a legal document, I heard a very quiet “pit-pat-pit-pat” right above my head. I put the yogurt down, and sat very quietly until I heard it again. “Pit-pat-pit-pat-scrape-scrabble.” Eyebrows raised, I guessed it was probably a squirrel, and I decided to inform the office manager when she arrived.

I let her know. She said she’d look into it. I thought that was the end of it.

The office manager didn’t want to look into it. Her budget was kind of tight, and calling someone to investigate, much less call someone for squirrel removal. Her option was to just pretend it wasn’t happening. After all, no one else was complaining, so maybe it’d just go away on its own.

At first, it was kind of amusing. I would be interrupted from my work with a scrabbling sound coming from above my head. But, as each day wore on, I stopped imagining a cute little creature and started grinding my teeth, thinking it must be doing this on purpose. How had I offended this little squirrel to justify its constant harassment?

My work definitely suffered, as did my office relations. I scowled a lot more at the office manager, who avoided my calls and deleted my emails, unread. I stopped coming in early, and I was one of the first employees to go home each day, just to get that stupid scrabbling out of my head.

When it got to the point where I was considering finding employment elsewhere, I finally hit upon the most genius idea. I convinced my boss I needed a larger space to house all my files, even if it meant giving up my coveted office. The owner’s son inherited my old second-floor office.

It’s likely squirrel removal happened shortly after that, but I really didn’t care. I finally had my peace and quiet back and could focus on my work again.