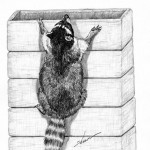 It’s time to serve an eviction notice to the raccoons in the eaves.  They’re squatters.  They just moved in one day, without signing any contracts, no move-in deposit, no rent for the three months they’ve lived there.  Sure, we have a tree overhanging the roof, but that’s not to say we have an open-door policy.  I’m about ready to get all medieval on their furry, thieving little butts.

Those raccoons climb up the tree, drop down on the roof, and have now ripped all the material, covering the eaves and some of the rain gutters, making themselves at home on top of my home.  They just sit on the rain gutter or the roof, and then climb down into the eaves they’ve accessed by ripping my house apart.  I’ve looked around, and it doesn’t look like they even have the decency to use some sort of raccoon out-house, so where are they going to the bathroom?  Inside the walls of my house!  These are the worst tenants EVER!

So, I’m imagining that, if they’re peeing and crapping in the eaves, and probably also bringing in food, they’re also attracting all kinds of bugs and flies and microscopic yuckies that then make themselves free to live in my home, too.  It’s getting out of control.

Now, they’re violating noise ordinances, because they’ve started to fight.  Have you heard a raccoon fight?  It’s not like some kind of minor domestic dispute from upstairs neighbors.  No, this is a special, growling, screeching, banging noise.  These raccoons in the eaves are destroying my home, they’re probably going to make me sick, and now they’re keeping me up at night and waking me up early in the morning with their noise.  They have GOT to go.

I’ve tried to evict them myself.  I put out traps.  I just caught squirrels.  Squirrels never bothered me, so I feel bad about trapping them.  But, now I’m wondering, if I get rid of the raccoons in the eaves, will squirrels just move in?  Will rats or mice be attracted to whatever food the raccoons have cached away, if any?

So, not only do I need someone to trap them and remove the raccoons from the eaves, but I also want repairs to be done.  Ew, and some kind of clean-up, too.  I think I’d want everything cleaned out and sanitized before we closed it back up again, just so we don’t get a bug problem or mouse problem on top of raccoons in the eaves.  Then, we’d need to put the siding or soffit up again and repair the rain gutters.  And, we’d need to do this before the rainy season, too, because I don’t want major water damage to the house.

So much to worry about and take care of, now I’ve got to evict the raccoons in the eaves.  I definitely never signed up to be a property manager for animal tenants!