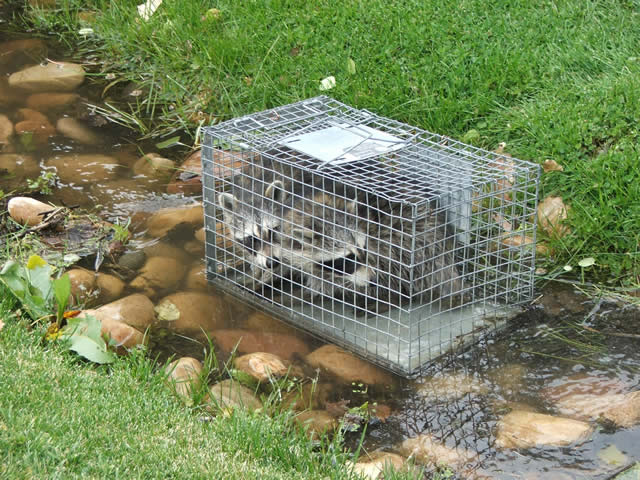 Normally, our Home Owners Association meetings are kind of boring, but the turnout for last night was astounding, considering we were discussing the overpopulation of raccoons in our neighborhood.  Everyone had a story to tell.  Raccoons defecating in someone’s backyard pool and someone else’s koi pond.  Raccoons getting into crawlspaces and making noises that keep homeowners awake all night.  Raccoons crawling down into chimneys and having babies there.  Raccoons tearing through siding, roofing materials, and fascia to get into attics.  Raccoons blocking vents.  Raccoons chewing through wiring.  Raccoons stealing pet food.  Raccoons attacking pets.  The list went on and on.

After everyone had a chance to vent a little about all the raccoon damage their property had suffered, the discussion got a little dicey.  Some people wanted to blame neighbors for causing this sudden overpopulation of raccoons.  People got blamed for pet food left outside for their animals.  People were accused of deliberately planting nut trees and fruit trees, which attract the raccoons.  Other people were called out for not securing their garbage cans securely enough.  Still others were told their wood piles attracted mice and rats, which then attracted the raccoons.

The Home Owners Association leaders had a real problem on their hand as things quickly got out of control.  When people have to pay out a lot of money to repair the damage raccoons cause, or when their children’s health is at risk, or their beloved pets are threatened, they tend to get pretty upset.  One big guy was finally able to calm everyone down when he remarked that we were all to blame.  Fact is, raccoons are drawn to our neighborhoods for all those reasons and more, and we should stop trying to find someone to blame and start seeking a solution.  It did make sense, and people calmed down for the most part.  I think a few hotheads will still hold a grudge against some of last night’s attendees, though.

So, instead of tallying up the damage, the discussion turned to whether each individual household should handle their raccoon problem individually, or if the Homeowners Association should contact a professional wildlife removal company to handle the problem for the entire neighborhood.  Of course, everyone would have to pay for the cost one way or another, either directly to the wildlife removal company or to the homeowners association.  Discussion lasted another hour or so before the inevitable committee was formed to research cost and put together a couple of different proposals to be announced at the next meeting.

I personally would be interested to find out why we’re dealing with an overpopulation of raccoons all of a sudden, and whether it had to do with some natural factor outside of my neighbor’s activities.  But, I don’t want to risk anyone pointing the finger at me and trying to get me to cover the cost of removing raccoons out of their attic just because I spoke up.  Perhaps I’ll research it anyway, but keep the findings to myself.