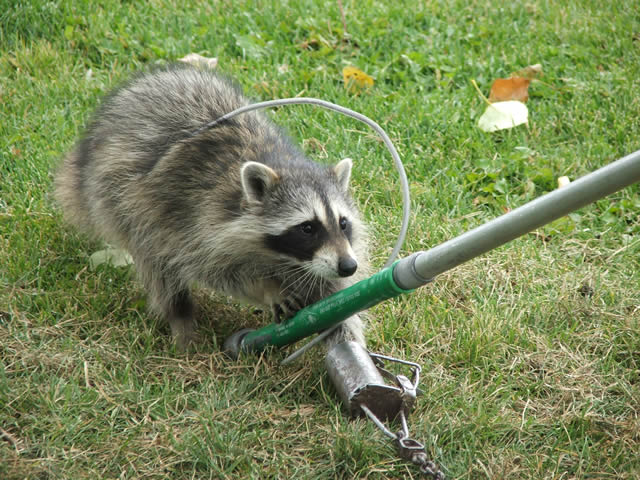 My son didn’t figure raccoon removal into his business plan, poor thing, but it’s turned into a valuable business lesson for him.

When my son was ten years old, he decided he wanted to do something every year to make extra money.  He’s a saver, not a spender, and I have the feeling he’s going to be a great business man some day.  So, when he came to me five years ago and told me his business plan, my husband and I had to support it.  His big plan was to “lease” our garden plot from us in June, plant pumpkin seeds, grow pumpkins as big as he could, and then sell them in the fall for the Halloween and Thanksgiving seasons.  My husband and I quizzed him about all the ins-and-outs of his plan, but he really had thought of just about everything.  I had been a lazy gardener that first year, so I had no problem leasing the garden plot to him in exchange for extra chores.  He purchased pumpkin seeds using some of the money he’d earned mowing lawns in the spring.  He researched the best pumpkin growing practices for our area.  And, he spent the summer and early fall helping his cash crop to grow.

I hate to admit it, but my husband and I were surprised at how vigilant he was.  He stuck it out, worked really hard, and had a fairly good-sized crop by the beginning of October.   He worked up some fliers, handed them out to his classmates in school, stuck them on neighbor’s doors, and sold every last pumpkin that year.  He saved every dime from that first crop, with the exception of purchasing better seeds for the following year.

Every year since then, he’s made a profit, which he’s saved, and he’s developed quite a reputation.  He doesn’t even talk about buying a car when he turns sixteen, or spend it on hobbies, but he’s currently talking about his next business venture.  He hasn’t settled on one, yet, but this year’s fight with the raccoons have pushed him away from pumpkins and towards something a little less troublesome.

His pumpkin patch has gotten bigger over the years as we’ve dedicated more and  more yard space to his business.  He walked out to work in it the other day and found, to his dismay, some animal had invaded and eaten some of his pumpkins.  He set up watch one night, and discovered he needed to remove raccoons from his pumpkin patch.

There were two raccoons, who waddled and scuttled furtively into the patch, then used their sharp claws and teeth to rip into a couple of pumpkins.  They kept scooping pumpkin flesh up into their mouths until my son ran them off.

Since then, he’s tried several raccoon removal techniques, but nothing’s worked for him.  He’s finally come to the conclusion that he needs to get a raccoon removal service.  Fortunately, one call to Allstate Animal Control got an expert out to his patch, who removed the raccoons.  Also, fortunately, the cost was much lower than my son had expected.  He’s decided raccoon removal is just part of the cost of doing business.  He’s also decided that maybe it’s time to try growing Christmas trees on the plot, instead of pumpkins.