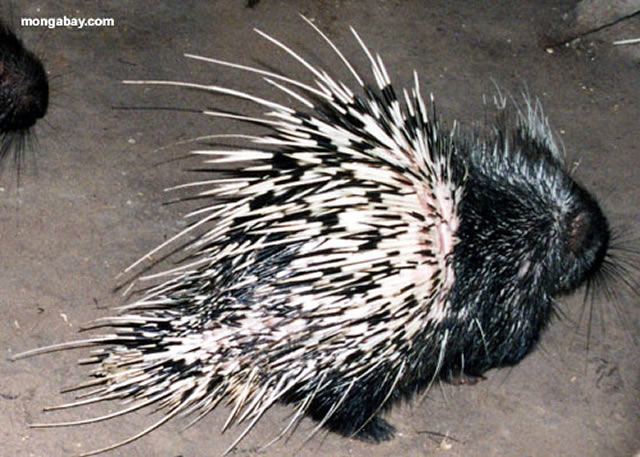 When you’re sitting in a barn, pulling quills out of a very angry horse, you come to one conclusion:  Get rid of porcupines.

Now, it’s true that porcupines aren’t vicious animals.  They don’t carry a lot of diseases, they don’t go on the offensive and chase after you with sharp teeth, they try to stay out of your way.  But, they are a nuisance and a pest, and I want to get rid of porcupines from off my property.

I’ve seen evidence of porcupine damage around the place.  The side of the barn got chewed up a little, and a couple of my apricot saplings died because a porcupine chewed up the trunk pretty good.  The only time I saw one in person is when I accidentally clipped one with my truck.  It scuttled off into the trees, so it seemed unhurt, but I was pulling quills out of my tire that night.

One of my dogs got some quills in the face, and has avoided going back outside at night ever since.  She’s a pretty small and mischievous dog, who just likes to chase anything that moves.  We find it endearing.  The porcupine did not.  Once the quills get inside a body, they’re not easy to pull out.  One buddy of mine suggested I cut the ends off the quills to get rid of a suction-effect.  I didn’t feel any difference.  The barbs on the quills make them all hard to pull out, suction or no suction, and very painful to the dog.  But the dog is small and trusting, and was easy enough to hold down while my sons and I pulled out each quill, one by one.  A horse is another matter.

I’d taken this horse out for a long ride just the day before, so I was giving her a rest, just letting her graze in our meadow.  She loves to just run as fast as she can from one fence to the other.  She’s also a curious horse.  I’m sure her curiosity got the better of her, and she got too close to a porcupine.  She must’ve cornered it, or made it nervous, because she got quills in both of her front legs.

Yep, time to get rid of porcupines.

I had to call the vet to come out and help me calm the horse down long enough to pull out all the quills.  Now, we’re worried about infection.  Not that a porcupine is poisonous or anything, but the tiny wounds could get infected if we’re not careful.

I’m tired of pulling out porcupine quills from my animals or tires.  I’m tired of finding holes chewed through my outbuildings.  It’s time to call Allstate Animal Control and get rid of the porcupines. 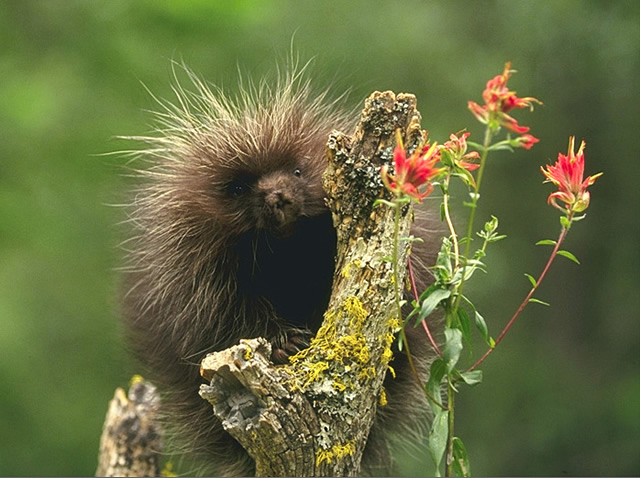 My son called the incident many things, including porcupine removal, a science experiment, a learning experience, and doing me a favor.  I called it “being stupid.”  I love my son.  He’s fourteen, adventurous, intelligent (usually), outgoing, and . . . did I mention adventurous?

It started when my husband and I noticed some of our wooden-handled tools had been chewed, along with some other items we keep in our storage shed.  In fact, one of the walls of the shed had been chewed down.  We also found some shallow holes dug throughout our back yard, and one of our trees had claw marks on the trunk and some of the bark had been pulled away.  We didn’t know what to think, until my husband heard something in the middle of the night, and walked outside to find a large porcupine waddling around.  He told us about the culprit over breakfast the next morning.

My son was thrilled.  My husband was not.  My husband called a porcupine removal service, which promised to send out a technician later that afternoon.  I looked at my son’s face and realized he was sorely disappointed he wouldn’t get a chance to see this porcupine up close.

But, when he and his friend got home from school that day, they hunted around the backyard looking for any signs of the animal while I was still at work.  They not only found signs, they found the animal itself.  The porcupine was resting in a shallow hole underneath the wooden deck stairs, and it was not happy to be disturbed by a couple of overanxious teenage boys.

My son and his friend decided to “do me a favor” and do “porcupine removal” themselves.  In truth, they really wanted to watch the animal in action and see what it would do.  So, they scared it up out of its hiding place and followed its wobbly walk all over the yard, preventing its escape when it headed for the back fence.  Finally, the boys got to see what they really wanted to see.  The porcupine quills all stuck out, and the animal turned around so its hind quarters were facing its predators, almost daring them to attack.

My son reached out his tennis-shoe clad foot and prodded at the porcupine’s tail.  The tail twitched out of the way, but the animal stood its ground.  My son got a little braver, and his foot actually touched the porcupine’s rump.  Sure enough, a few quills stuck into the rubber sole, much to my son’s delight!  Now, he could study these quills up close.

The boys retreated slightly to look closer at the quills embedded in the shoe, and the porcupine turned its head around to check to see if they were still there.  Sure enough, my son and his friend were still there, but they were so intent on pulling the quills out of the shoe that they didn’t see the porcupine run towards the fence until it was too late.  It was gone.  Technically, porcupine removal and my son’s science experience had been successful, but I was just grateful there was no damage to the boys other than to the shoe.

As a vet, it was one of the worst cases I’d seen of porcupine quill removal gone wrong. The poor dog had abscesses all over its chest, muzzle and even his tongue.  The skin was more sensitive where the pus-filled cavities lay just under the surface, and warmer to the touch. His body was trying to fight off the little pockets of infection, but it was obvious the dog was in pain.

His owners had tried to remove all the quills with pliers at home after the boxer had chased the porcupine down and tried to catch it.  All he got was a face full of quills.  The family had calmed the dog down, and attempted to pull each quill out one by one, figuring the remaining barbs would work their way out.  Unfortunately, they didn’t know the barbs are shaped in such a way that they usually work their way inward, forming abscesses and sometimes working their way in so deeply they penetrate organs.  Yes, dogs are tough, but quills that keep working their way inward into the body are painful, no matter how tough you are.

The owners had thought they had a deer problem, and had no idea they needed porcupine removal.  They noticed the bark was pulled away from the bottom of the trunks of their trees, and many plants in their beautiful garden were eaten.  They had found portions of the wooden handles of their tools gnawed away, teeth marks in one of the support beams on their children’s playhouse, and holes in one of the tires of the four-wheeler.  It never occurred to them that these were all caused by the same animal, the porcupine.  Porcupines love to chew on wood, and anything salty.  The four-wheeler’s tires had salt from the roadways salted after a snow storm and attracted the spiny animal.  Once their dog came yelping to the back door, impaled with over 200 quills around his mouth and chest, though, they finally figured out they had a porcupine problem.

They’d held the dog down, gotten out a pair of pliers, and started tugging.  Not a pleasant experience for the poor pet.  Porcupine quills are like feather shafts, and can splinter if handled incorrectly.  And, when some of the quills broke, the barbs just started working their way in deeper, eventually causing a great deal more pain and infection.

I had to put the dog under anesthesia, just to get him to relax the muscles enough for me to pull each quill out.  We scheduled an ultrasound and later surgery to remove the quills that had moved in deeper.  Fortunately, the quills hadn’t gone in so deep as to touch any organs.

I recommended the family not attempt porcupine removal themselves, as it might end up as disastrous as removing the quills themselves.  The best way to ensure the job is done right is to call a professional.