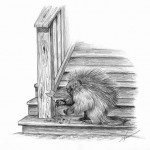 My grandpa tells the best stories, and I’ve loved listening to him ever since I was tiny.  I thought I’d heard them all, but I overheard him telling my four year-old daughter a story about a porcupine problem the other day.  She’d learned about porcupines in preschool and I’d shown her videos online, but I’m sure she’ll always remember my grandfather telling her all about the porcupine problem.

My grandfather’s a good ol’ boy from Georgia.  He ends most sentences with “Dontcha Know” or “Dontcha See.”  He says it as if it’s all one word, and sometimes says both of them one right after the other.  It’s frustrating to some, annoying to others, but it’s endearing to me.

“Oh, why we had a problem with a porcupine once when I was a little ‘un, Dontcha Know Dontcha See.”  My daughter was tucked up on his knee, listening with sparkling eyes, just as I used to when I was a child.  “It just come right outta the woods n’ wandered all over the place, mostly at night, and every once in a while, we’d see it shufflin’ around out there, Dontcha See.  I threw a few rocks at it, hopin’ to scare it off, but it never did pay me no mind, it just always come back, Dontcha Know.”

I smiled, thrilled to be hearing a new story.

“Well, this porcupine, he chewed a hole right into Daddy’s work shed, clean through the wood walls, Dontcha See.  And, I take it that’s where it lived for a while, especially since my Daddy didn’t do a whole lotta work out in that shed during the cold months, as it didn’t have no heat in there, Dontcha See.   But, that porcupine didn’t pay no heed to heat or no, it just up and moved right on in and started chewing on my Daddy’s tools, Dontcha Know.  Well, my brother and I, we never did think about telling Daddy about the porcupine problem, we just liked to watch it when we could and we thought it was something fun, knowing we had a porcupine in the shed, Dontcha See.  So, spring come, and Mommy had some project or other for my Daddy to do, and out he goes to the shed, fixin’ to get the job done, Dontcha Know.  ‘Fore we know it, he comes a hollerin’ outta that shed, mad as heck, yellin’ for us boys to come on out, Dontcha Know.  We ran out, fast as we could, and he started hollerin’ as how we oughtn’t to touch his tools and break the handles off, and didn’t we know it’d cost good money to replace all the wood that we’d broken, Dontcha See.  Well, he didn’t calm down for a long time, but once he did, we convinced him as how we had a porcupine problem and that porcupine done chewed up all the wood handles on his favorite tools, Dontcha See.  It took some quick explainin’ but he finally saw as how we was probably right, we had a porcupine problem, and we didn’t get skinned that day for getting’ into his tools, since it was the porcupine, Dontcha Know.”

Admittedly, a story about a porcupine problem wasn’t his best story ever, but it was the last one he got to tell my daughter before he passed, and I’ll always cherish it.  Dontcha Know.

Ah, night, the perfect time for me to come out and cause all kinds of porcupine problems.  I’m really a very gentle creature, despite the quills, but for some reason, people don’t like me very much.  I think I’m pretty cute, with my little precious face and my tiny little paws, and my quills all laid back when I’m happy.  But, destroy a few trees, dig up a little yard, and all of a sudden you’re the bad guy.

Really, it’s not that big a deal.  It’s just your trees are so perfectly wonderful to eat.  I just can’t stop myself when they’re young and tender like that.  Sure, a few trees die because my gnawing leaves them prone to disease, but a porcupine’s gotta eat, right?  And, those tender vegetable plants in the garden.  That was so very kind of you to spend all that time and money planting those and taking care of them so that I could have a tasty treat when I emerged from the woods onto your property.  You assumed they were eaten by rabbits, and I was happy to let rabbits take the blame.  But, I guess at some point you figured out you had a porcupine problem.  I wonder what gave it away.

Oh, it might have been that wonderful plywood you’d stacked by your shed.  I couldn’t believe my eyes when I spotted that and waddled over.  You people create the most wonderful things to eat.  That laminate glue that holds each plywood layer together is just so delectable.  What a delicacy.  I just gnawed and gnawed on that all night long until most of it was gone.  I think that may have been when you realized the tree girdling and destroyed garden plants was my work instead of some other creature.

I did not enjoy your dog’s presence the night after the plywood incident.  I guess he was supposed to scare me off, but he just came right at me like he was going to attack and eat me, so I had to defend myself.  All I did was stick my quills up.  I didn’t throw them, I can’t throw them.  So, it was your dog’s fault, really, to end up with a mouth full of quills.  I feel bad for the guy, I really do, but I couldn’t just let myself become dog food over a little plywood incident.  He’ll live.  It’ll be painful for a while, but he’ll live.  And, lucky for me, so will I.

I gotta admit, the tool shed is looking really intriguing.  I might have to investigate it tonight.  I’m hoping to find some sweat-soaked wooden handles I can chew up.  Mmmm, salt!  I can’t get enough of it.  I’m sorry you think you have a porcupine problem, but your property is just so darned inviting.  I think I might dig up against the warm foundation of your home and set up a den.  It just seems too perfect a place to give up right now.