We have had a pigeon problem for the last two years now, and it’s only getting worse.  It started off with just one or two that would occasionally land on the roof and hang out; eventually we noticed a small nest tucked into the side of the chimney.  As the months went on we started to hear the small chirps of baby birds and in time saw the small birds leave the nest, but of course they came back in the end.  The cycle continued, we would see new birds roosting, then we would notice either a new nest, or an addition to the original, and then baby birds would start to come out. It was an endless loop we couldn’t get out of.

Last year we started to try to get rid of the pigeons.  We set up spikes along the slope of our roof, we would spray water at the pigeons that were simply roosting, and anything else we could think of.  No matter what we did it seemed like they always came back with twice the number of birds as there were before.  Our pigeon problem was escalating to the point of complete chaos!  In the mornings you would hear them chirping and squawking, and their poop was covering EVERYTHING!! I was slowly losing my mind.

This year, we took a different approach to our pigeon problem, we checked the nests for any eggs or baby birds AND THEN WE KNOCKED THEM DOWN! Every single nest we could find went into the dumpster and out to the curb.  Then, knowing they would inevitably come back, we installed mesh netting along all of the niches and nooks that a nest could be built.  We were very proud of our work, but I’ll be damned if the birds didn’t come back anyway.  Instead of nesting, they stood and pecked at the netting and roosted on the netting and still, pooped, EVERYWHERE. Every single day I was spraying pigeon crap off of my deck and siding and roof until I just couldn’t take it anymore.  I called in a professional and he’s setting up a huge pigeon trap on my roof.  It might not be the cheapest solution, but it is the most guaranteed solution of any I’ve seen or tried.  At this point, I would try anything short of black magic to take care of my pigeon problem. 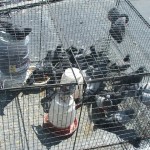