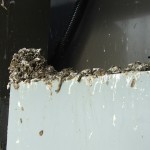 We all thought my sister Marcy was making up the dumbest story. She kept saying that she saw pigeons living in the drive-through car wash, which was totally stupid, because there’s no way  they would survive in there, with all the machinery moving and the soap spray and everything else going on in there.  Of course she said she tried to take pictures of them with her phone, but that’s just when the soap covered her car, or the picture was too blurry with water spray or the big spinning brushes in there.  Convenient.  Pigeons in the car wash, but no way to take a picture of them?!  Yeah, right.

Mom and Dad are letting us share a car, but we have to pay for the gas, change the oil regularly, and make sure it stays clean.  Course, that works in theory for my parents, cuz they don’t have to drive us around all the time, but it means that Marcy and I fight all the time over the car.  When Dad threatened to take the car away if we couldn’t work things out, we decided we’d both contribute to the “Car Jar”, which means a little bit of both of our paychecks goes into the jar to pay for gas, carwashes, stuff like that.  Then, whoever goes to get that done just pulls the money out of the jar for it.  It kind of works.  But, we still fight a lot over who has to do what, and who gets to use the car each day.  We just don’t fight around Mom and Dad anymore.

But, every time it’s Marcy’s turn to get the car washed, she complains.  She doesn’t want to do it herself, so she takes it to the only drive-through car wash.  Fine, whatever.  But, then she complains that the pigeons in the car wash freak her out.  Plus, she says, why should she wash the car there if they’re just going to poop on it as soon as she drives out.  I thought she was just making it up because she hates having to do anything like wash the car or vacuum it or anything else.  She’s pretty lazy.

So I finally said I’d take the car through the drive-through wash, just to shut her up.  When our car was dirty enough to justify the ten bucks, I headed on over with Marcy in the passenger’s seat.

Wouldn’t you know it, even with the spray and soap and brushes everywhere, I could see some pigeons in the car wash.  One of them was sitting on the tiny ledge above a window, and another pigeon actually had a nest on top of the big dryer that moves up and down.  There were eggs up there!  Marcy said that was new, and she finally got her picture of the pigeons in the car wash.  She took the picture just before our car went under the dryer and right before that pigeon pooped on the windshield.  Unbelievable.  Guess my sister’s not as stupid as I thought.  We showed the manager our picture and got another free car wash out of it, but I got the impression they already knew they had pigeons in the car wash and just didn’t want to do anything about it.  Marcy made a deal with me – I always wash the car at home so she doesn’t have to go to the car wash again, and she puts a little extra money in the Car Jar.  Works for me.