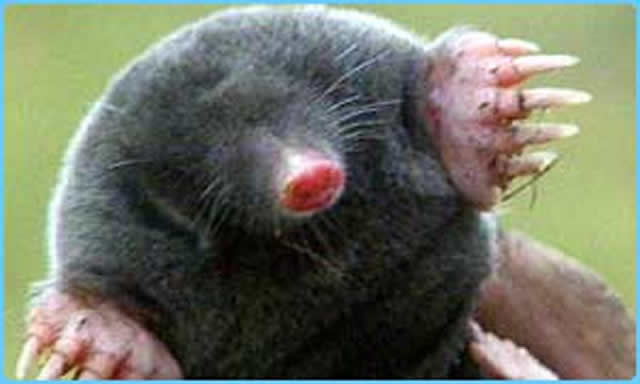 Moles in Hollywood are picketing production houses and animation studios in an effort to alter the public’s perception of them.  While they are aware that more people will want to get rid of moles if they are successful, they say it will be worth it.

“Most everyone thinks we’re just blind, soft, cute and dumb, but there’s so much more to us.  We’re not totally blind or dumb,” one mole organizer explained.

Their letter to one animation studio cited old and recent movies, claiming the cartoons make them into “caricatures, either as terrible pests or as single-minded, blind but cute beasts.”

“Why can’t they see that moles are people, too?” one picketer with particularly soft fur said.

In response, the public relations manager for the animation studio came out with this statement:  “While many humans define moles as “odd looking”, they are also cute.

We see that as a good thing, and we use this to our best advantage in our cartoons.  We cannot be held responsible if they have soft fur and adorable little noses.”

Another production house whose recent film vilified the rodent took an opposite stance.  “Moles do a lot more damage than we actually showed in our movie.  They cost homeowners a lot of money when they kill off the grass or plants, and their ridges of dirt are unsightly and make lawn care difficult.”

Picket organizers admit they had a difficult time getting moles to join them, since they are not extremely social creatures.  “We just felt it was worth the effort, because we have so many great qualities humans are missing.  For example, we have twice as much blood as other creatures our size, which helps us to breathe better underground where we have low oxygen and high carbon dioxide.  Where is that information in the movies?”

Some moles from a nearby subdivision are speaking out against the L.A. protest.  They seem to fear reprisals, greater efforts to get rid of moles.  One mole, who wishes to remain anonymous, said:  “We have a hard enough time as it is, without these big city moles bringing all this attention to us.  They want to tell the truth about us?  Then tell everyone we can eat up to 50 pounds of grubs every year.  That’s good for your lawn, never mind the damage we might do to the rest of the yard.”

Moles do not eat vegetation, but their tunneling activities do turn the grass brown.  They are excellent at tunneling.  It is estimated they are able to dig their tunnels at 18 feet per hour.

Perhaps my interview with one local homeowner and his daughter says it all.  “They’d be welcome to all the grubs in my yard, if only they didn’t have to dig.  I’d be happy to have them here if they weren’t killing off my grass.”  His daughter added, “Ooooh!  They’re so cute!”

When 13 year-old Nathan needed to make some extra cash one summer, he thought he could do yard work for the neighbors, having no idea that mole removal would become one of his chores.  He knocked on the doors of his neighbors, explained that he was trying to earn some extra money, and asked if they would hire him to do some work around the house or yard.

Most of his neighbors were happy to do their own yard work, not really trusting the young boy to keep their lawns looking as good as they liked.  But, the Johnsons took pity on him and said yes.

He showed up at the Johnson’s one Saturday morning, as previously planned, and they started him off with pulling some weeds from the garden.  That went well, he was paid, and they set up a time for him to come back the following Saturday.

Mr. Johnson came out to talk with Nathan and give him his weekly yard chore.  As he looked over the yard, Mr. Johnson became more and more agitated, kicking at little mounds of dirt.  Finally, he said, “Nathan, if you are successful at mole removal, I’ll give you $100!”

Well, needless to say, other types of yardwork at five bucks an hour just seemed pointless.  He had his task in front of him, and he’d figure it out one way or another.

Nathan searched online for ideas and suggestions.  He tried making noisemakers and sticking them down the holes to drive the moles out.  The moles stayed.  He considered burning them out, as one video implied, but figured Mr. Johnson might not give him the hundred dollars if he caught his lawn on fire, or exploded a gas line, so he ruled that out.  He tried to flush the moles out by flooding the holes with water.  He poured oil down the holes in an effort to “stink them out.”  Nothing worked.

One Saturday, he was out in the Johnson’s yard with a leaf blower, blowing the leaves into piles, when he passed one of the dreaded mole hills.  He stopped, mind whirring.  Could it possibly work?  Naw.  Well, it might be worth a try.

Sticking the end of the leaf blower in the hole, he laughed, imagining moles flying out of each hole high in the sky.  Wouldn’t it be great if he could finally earn that promised hundred dollars and stop pulling weeds, sweeping sidewalks, and bagging leaves?

Unfortunately, real life doesn’t always work the way we think it should.  Nathan earned his five dollars an hour that Saturday, and Mr. Johnson called a professional service for mole removal.