Authorities in Martinez, California were surprised at their community’s reaction to their decision to get rid of the beavers that were destroying the local waterway, a portion of Alhambra Creek that ran through the center of the city.

Two beavers had built a dam large enough to divert the waterway in several places, and had chewed through willows and landscaping the city had planted in previous years to prevent flooding.  The flood control landscaping had cost the city $9.7 million, and it would be expensive to repair the damage the beavers had caused.  City leaders decided the beavers had become a costly flood danger to their community.

Authorities felt they had to take action quickly to avoid extensive damage and danger, and plans were drawn up to get rid of the beaver population.  California Department of Fish and Game (DFG) does not allow for relocation of beavers, so they had decided to trap and kill the beavers and destroy the dam.

The announcement was made, and city leaders expected their citizens would be grateful and supportive of their plans.  If beaver dams cause flooding, it can result in contaminated drinking water and costly property damage.  Although they also anticipated a few dissenters, however, reaction was exactly the opposite.  While some people supported their efforts, they faced public outcry in favor of the beavers.

Local school teachers contended that the beavers provided a wonderful learning opportunity for the children and the community as a whole.  Local business owners felt they would bring more tourists to their city.  Environmentalists wanted to let nature take its course.

Due to the general public’s sentiments, DFG issued an exemption for the two living in the creek to enable them to be relocated.  Public support was so strong for them, however, the city has decided to let them stay, provided certain criteria were met.  Business owners downtown, especially, demanded the city provide adequate flood control measures.  A steel cable was placed under the dam attached to anchors on each bank.  If the waters rise to dangerously high levels, the cable could be pulled, pulling the dam apart.  A flow device was also placed through the dam:  a pipe allowing water to flow through the dam in an effort to keep the waters down to normal levels.

Of course, individual property owners may still be concerned about a growing beaver population.  As the number of beavers increase, they will destroy trees, alter property lines through erosion caused by diverted waterways, or cause flooding, damaging homes and businesses.  Individuals may still want to get rid of the beavers, but they will need to seek special permission from the local and state authorities before proceeding with any measures to do so. 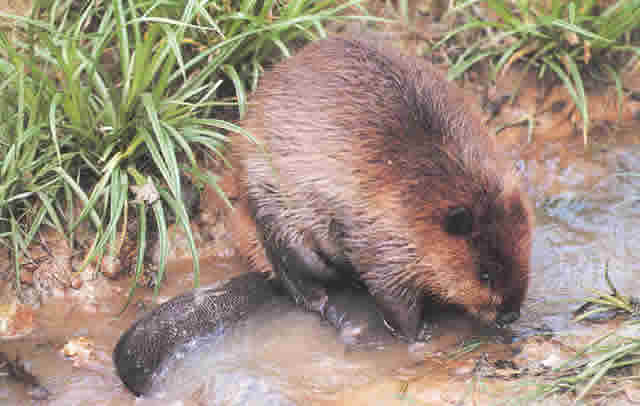 I can’t believe my Mom asked me, of all people, how to get rid of beavers living on her cabin property.  I’m an animal rights activist!  Does she not get that?  I’m not the kind of activist that breaks into places and releases zoo animals out onto suburban streets or anything, but I attend rallies and work in the local no-kill shelter and want mankind to preserve the natural habitats of wild animals.

So you can understand why I was a little shocked when my Mom called me up and asked me if I knew how to remove the beavers off her property upstate.  She said she figured I knew all about wild animals, or at least knew people who knew about them, that I could help her out.  Fact is, I don’t know anything about how to get rid of beavers, but I helped petition a state park to stop their demonstration on how to skin a beaver once.  I guess my Mom thought I was an expert, then.

I agreed to meet up with her on the property and take a look at it for myself.  As I drove up there, I thought about how great Mom’s been at taking care of everything herself since Dad passed away several years ago.  She has the house and the large lot upstate with the cabin.  I resolved to help her out more.

I got there before she did, and let myself in.  The cabin held a lot of memories for me: family trips up in the mountains, cross-country skiing, Dad trying to teach me how to fish in the stream that ran through the property, Mom taking me on long hikes in the fall to watch the leaves change color.  I strolled outside, fondly remembering the time when Mom and Dad let me throw a big party up here in high school.  Somehow we all made it back in one piece!

And then, something caught my eye.  Several trees that had been here forever lay dead on the ground.  The beavers had gotten to them.  I decided to walk a little further over to the stream and was amazed to see the little stream was now a big pond.  The new pond had eroded away a good portion of the cabin’s backyard.  If it got any bigger, it would flood the cabin, or worse, damage its foundation.  I wondered if it had backed up the septic pipe, or contaminated the water feeding our well.

No wonder Mom was so upset.  If the cabin flooded or was seriously damaged, if the well water was undrinkable, it would cost her a lot of money, money I didn’t think she had.   Beavers could live anywhere they wanted up here in the mountains, why’d they have to choose my Mom’s property?  As I saw my Mom’s car driving up to the cabin, I whipped out my cell phone and called a friend.  “Hey, Rick, any idea how to get rid of beavers?” I asked him.