My husband and I love to travel, and one thing we’ve noticed is there is a huge need for feral cat removal all around the world.

We’re not your standard American tourists, who stick to bus tours, museums, gift shops and well-known monuments.  We love to walk off the beaten track, strolling into neighborhoods and going where the locals like to hang out.  In our opinion, it’s the best way to see the world, see how someone else lives.

And, we have seen how feral cats are a big problem wherever you live.  Some places have worse problems than others.  Maui has a large feral cat population.  They love to hang out in alleys behind restaurants, munching on free food and the rodents that come to rummage in the trash.  In Tunisia, it’s crazy.  Wild cats roam around the streets, nosing through garbage, tracking disease and fleas and ticks wherever they go.  It seems odd that no one seems to think of feral cat removal in some places.

After a long trip, we love coming home.  Our bed just seems softer, our home more cozy.  We unpack our suitcases, exhausted and ready for a long night’s rest.  Then, in the middle of the night, we’re awakened by a nerve-jarring “rawrrrr-rawrrrrr-hisss.”  Apparently, we have a feral cat problem right in our own neighborhood, and they’re out there fighting and hissing and tracking disease and all over our own subdivision.   We love our neighbors, but can they be serious, setting out food and shelter for the wild cats roaming our streets?  We love cats as much as they do, but if you don’t provide food and shelter, the wild ones will find it somewhere else!

What’s worse, they love to leave their garage door open just a little, just to give the wild cats a warm place to sleep and have their litters.  When the kittens are born, they’re just allowed to wander in and out of their garage.  The cats make a toilet out of our garden, and spray our walls to mark their territory.

We desperately wish our neighbors would at least have the courtesy to trap and neuter or spay the wild cats they feed and house.  That way, the problem would be reduced.  We are seriously considering calling a feral cat removal service ourselves, asking them to be discreet in their efforts at trapping.  We’d hate ending up in a fight with our neighbors over cats that don’t even belong to us, but we’ve seen how bad the issue can be in cities all over the world.  Please don’t let it happen here! 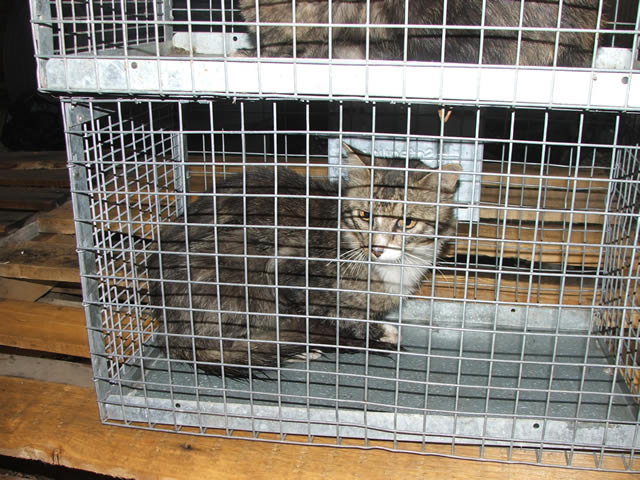 Getting rid of a feral cat is not something usually attempted by a homeowner, but one couple was at the end of their rope.

Like many pet owners, they had a doggie door, to allow their dog access in and out of the home to “take care of its business” without waking them up late at night or first thing every morning.  It was extremely frustrating, then, when they were awakened in the middle of the night by crashes coming from the kitchen.  The husband grabbed up a golf club and the wife followed him as he ran out of their bedroom to see what was going on in their home.  Grabbing for the light switch, they saw what had caused the ruckus:  a feral cat.

They’d seen this cat roaming around the neighborhood.  None of their neighbors claimed it was theirs, and no one seemed to be leaving food out for it.  Someone had seen it rooting around in their garbage one night, but it was quickly chased off.  Now, though, it had found access to their house, and was stealing the dog’s food and making a horrific mess.

They had successfully chased it out of the house that night and thought it was a one-time adventure.  Unfortunately, the cat had other ideas.  For three nights in a row, it came in and made a nuisance of itself.  It would meow, hiss at the dog, help itself to food, knock over dishes, and spraying the walls.  Night after night, they would chase it away.  And day after day, they would clean up after it.  The wife tried not to think too much about where that cat had been, how filthy it must be, and what kind of parasites it was bringing into the house.  Each day, they would come up with another way to scare it off, but nothing worked.  They just had to get rid of this feral cat.

On the third night, they trapped it, but it escaped.  A new trap was purchased, and the husband devised a makeshift “catcher.”  He got a long tube and pushed a loop of extension cord through it.  That fourth night, it was fairly quiet, but they were sure the cat was still in the kitchen by the morning.  Sure enough, a low growl and a hiss came from behind the refrigerator.

Grabbing up the stiff cardboard tube and extension cord, the husband left a loop of it hanging out of one end and held the other end tight.  The extra cord just snaked behind him.  First, he had to get the cat to come out from behind the refrigerator, so he banged one side until the cat streaked out the other side, leaping onto the counter.  After several careful approaches, cutting off all escape routes, and ignoring the broken dishes, he was finally able to get rid of the feral cat by throwing the looped extension cord around its neck, pulling it just tight enough to keep the cat from escaping, and carrying it across the room to deposit the cat in a trap.

Now, all they had to do was find out what the laws said they could do with this wild creature.  Until then, the cat sat there in their kitchen, snug in its wire cage and far away from the dog food or kitchen appliances.