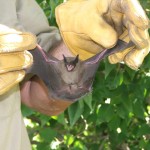 I had to send our office staff home, because we have bats at work.  I run a human resource company, handling human resource needs for small companies in the area that don’t have the staff or experience to handle it themselves. As you can imagine, my staff is extremely busy and I need them at their desks, but I won’t make them work in an environment where bats are hanging out on the ceiling or dive bombing employees.

Several of my staff had noticed the creatures flying around the roof line and entrance way a couple of weeks ago.  Admittedly, I didn’t think much of it.  I just assumed the bats were migrating and searching out insects for food.  Obviously, the problem was much greater than I thought.  I should have contacted Allstate Animal Control as soon as we saw a few bats, just so they could inspect the building and see if they were getting inside and roosting.  Now, they’re definitely inside the roof, the eaves and even inside the office space.

One of my best sales people was on a call this morning when she noticed a bat on the ceiling in her office.  She held it together and finished her phone call, but then ran out of her office and slammed the door behind her.  Thank heavens it didn’t fly around her head, and everyone knew enough to leave it alone and not try to pick it up or anything.  Yes, I have insurance for my staff, but I’d hate to have to send anyone to the hospital because of an unsafe work environment.

I just don’t want to risk having one of our employees being bitten or scratched by a bat, and you can just imagine the kind of chaos several bats cause.  No one can really focus on their work, and some of our employees are genuinely afraid of them.  So, I made the decision to send the staff home, and need to take get rid of the bats as quickly as possible so they can either return later today or tomorrow morning.  My employees who get paid by the hour are concerned, too, because they don’t want to lose out on their paycheck.  They also don’t want a trip to the hospital because of a bat bite.

I have no idea how many we have, but I need the bats removed quickly so my employees can safely go back to work.  I also want any holes or gaps sealed up so I don’t have to deal with this again.  In this economy, well, in any economy really, what business owner can afford to shut down operations for any length of time because of wild animals in the office building?