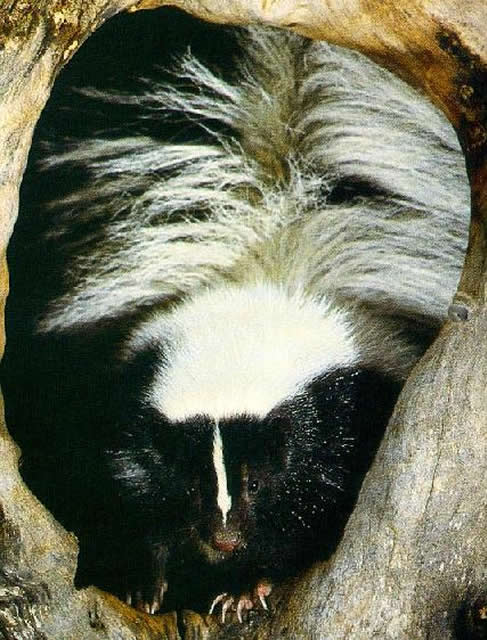 The last thing I wanted to do when we got home late from our camping trip was worry about skunk control.  We had a great and well-deserved trip, and we were exhausted by the time we finally pulled up to our home.  We had already decided we’d leave all the stuff in the truck and unpack in the morning, since it was late, we were tired, and we didn’t want to wake up neighbors by making noise as we unloaded.  So, we pulled in the driveway, grabbed the food bag that would go directly into the fridge, and unlocked the front door.

I’ll admit, we were so tired we didn’t realize the house smelled funny until after we’d put the food in the fridge, fed the cat, checked our messages and headed upstairs.  Halfway up the stairs, my husband stopped and sniffed.  “Do you smell that?” he asked me.  I sniffed and smelled a faint musky odor.  It was definitely animal in origin, and at first I assumed it was the cat.  “Maybe Snuffles got mad at us and used a closet for her toilet?” I suggested.  “No, it’s not the cat, I don’t think,” said my husband.  “It smells like, I don’t know, some wild animal or something.”

The thought of wild animal smell in our house was too much to let slide until we were more coherent in the morning, after a night’s rest.  So, we spent the next forty minutes wandering around the house, inside and out, sniffing and looking and hoping we wouldn’t come face to face with an animal.  Camping is fine.  We expect to see wild animals, although we do everything we can to keep them away from the tent, of course, and at a distance.  When we’re at home, we expect wild animals to remain outside.  Far outside.  I was making another round around the house with my flashlight in the dark, and rounded the south side just in time to hear a rustling in the bushes next to our foundation, and see a little black and white striped animal hustle back underneath the undergrowth.  This was no animal we could just scare away.  We would need skunk control.

I made it back inside the house where my husband was looking through the basement, and explained what I saw.  He agreed we would need to get a professional to do the skunk control for us.  We just weren’t equipped to handle it ourselves.  More than likely, the skunk was attracted to our house because of the cat food bowl we’d filled outside.  We didn’t want the cat to go hungry during our four-day camping trip, so we’d filled her bowl to overflowing.  Cats are so easy.  They’ll just eat their fill and come back for more when they’re hungry again.  Of course, we didn’t think about how the cat food would attract other animals, especially skunks.  So, the skunk probably smelled the food, helped itself, and dug a little burrow or den or whatever they sleep in right under  the foundation of our home, over by the bushes that had halfway hidden the skunk earlier.

We got the number for Allstate Animal Control from the web, and vowed to call them first thing in the morning, even before unpacking the truck.  Skunk control is just the last thing you want to attempt when you’re already tired, it’s late, and all you want is a long, hot shower and a soft bed.