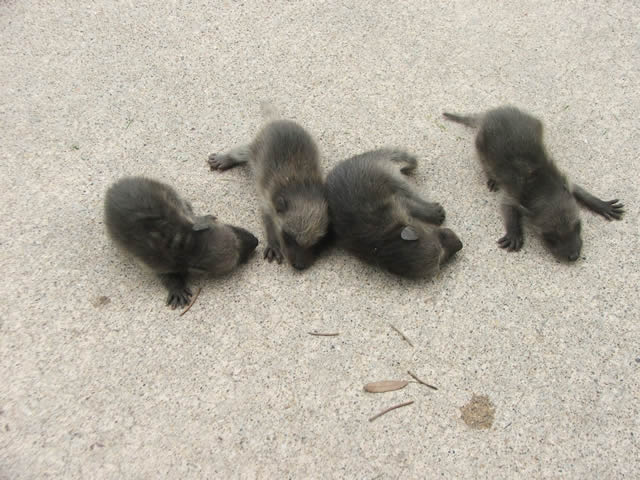 She thought she’d found a place safe from anyone attempting a raccoon removal.  Quiet, warm, free from predators such as bobcats, cougars or coyotes, the attic she found would protect her babies while giving them the best shelter she could find.  It was certainly better than the small hole in the rotten tree outside where it was freezing cold and wet from the slushy rain that had been almost nonstop.

Digging a small depression in the attic’s insulation, she gave birth to her four cubs.  At night, she would slink out for a short time, forage for food, and go straight back to her nest.

It was a perfect life.  Warm, protected, with plenty of food, she was prepared to hole up in this soft place with her cubs for a couple of months.

Everything was just fine for a few weeks, until . . .

Scratch, Thump!  A form appeared from the floor, and then, threw something onto the wooden beams and foamy insulation with a muted clang.  A bright light swung around the warm, dark space, catching her eyes and making them gleam in the darkness.  This was it, this was the thing she feared.  Raccoon removal.

There were at least two of them, great big men armed with a shovel and heavy gloves, growling incomprehensibly at each other.  Reacting quickly, she snapped up the nearest cub in her teeth and ran to the far end of the attic, hoping to get back to the nest in time to snatch up another one.  No such luck, the men were faster.  There they stood by her babies, hunched over, huge, shining that awful light into her eyes and muttering.  All she could do was growl and bare her teeth, hoping that would be enough to frighten them away from the nest.  She would charge them if she had to, but she desperately hoped it wouldn’t be necessary.

All four of her babies, including the one she had next to her, shivered with small, weak chitters, crying out for her, crying out for life to return to the safe haven they had known until now.  She paced angrily, nervously, never once taking her eyes off these men who had come for raccoon removal.

No!  One of the men reached down and scooped up two of her cubs in one hand, placing them gently in a bag.  Anguished, she watched the last of the remaining cubs in the nest disappear into the bag as well.  She was not going to let them get her final cub, safely curled at her feet.  A shovel landed near her, but she didn’t even flinch.  She was not going to make raccoon removal an easy thing for these men to do.

She feared for her own life, as well as that of her cubs as she was dragged out of that attic, shoved into a cage and hauled outside to be placed on a large truck.  Her fears quickly turned to relief when she was quickly reunited with all four of her cubs and taken to another warm shelter.  Nothing would ever be as warm or as comfortable and free as that soft den in the attic, though.