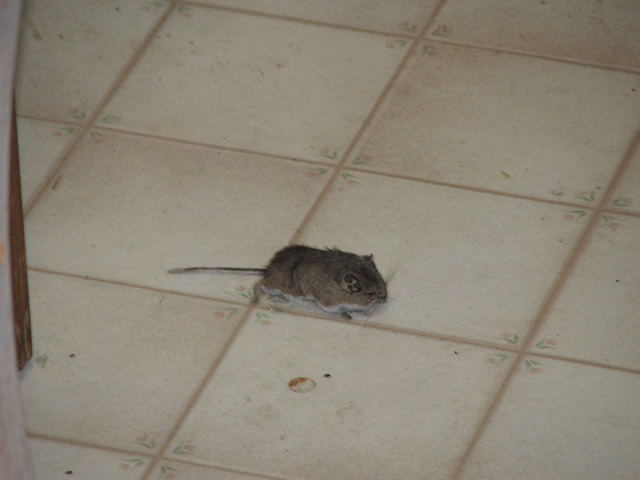 I’ve done a lot of mice removal in my job at pest control, and my favorite thing to do is train the new guy!  Most of our house calls end up pretty standard.  We just see the proof that mice have been there.  Tons and tons of mouse droppings.  Looks like little black grains of rice scattered all over, and the stuff can be pretty toxic if it’s not cleaned up right.  Usually, that’s all we see before we set up the traps, but every now and then, I get to see a grown man scream like a little girl.  It’s the best part of my job.

We pulled up in front of the nice house.  It was this kid’s first day on the job.  We introduced ourselves to the homeowner, and she told us the standard story about spotting mouse droppings under the kitchen sink, right where she keeps the garbage.  She said she knew they had a mouse problem, but she called for mice removal the day she reached in to throw something away and a mouse jumped right over her hand.

She told us the story while laughing at herself.  She said she could handle most things like snakes and spiders, and she even likes pet mice.  But, have a wild one leap unexpectedly out of your garbage can and over your hand.  She laughed and admitted she didn’t handle that as well as she thought she would.  I think she said screaming was involved.

It was time to have the new kid look under the sink.  He needed to clean up the droppings and set the traps for mice removal, all while keeping an eye out for tiny holes that might be the “front door” for the mice.  He reached in to grab the garbage can and, wouldn’t ya know it, the can had two tiny little occupants that didn’t like being moved.  They jumped out at him, squeaking, and sent the kid tripping over himself backwards, screaming like a little girl.  Just another perk of the job!

Of course, we caught those two mice for the nice lady, who’d quickly retreated to perch on a chair, cleaned up the droppings, set traps and plugged the hole we found.  I never let the kid live that one down, though!  We teased him about it for years.  I never did bother to tell him about the first time I’d had a mouse jump out at me, but no need to bring up the past, right?