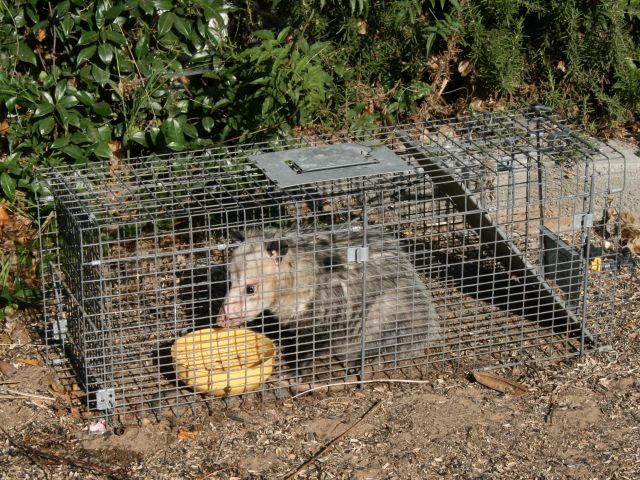 Being a techie at a stadium is one of the best jobs a person could ever do, but it should never include getting rid of an opossum.

I’m part of the stage crew at a large theater downtown.  Every day is a little different, depending on the show or concert that will be playing here.  Some days are spent lighting and re-lighting for a show that’s coming through our city, spiking the stage (putting tape marks all over the stage so we know where a set piece is supposed to go in the middle of a show), testing the sound system, or making sure the green rooms and dressing rooms are prepared.  Some of our guest celebrities are very particular about how they want their dressing rooms arranged and stocked.  Some days are spent with maintenance, such as keeping the house in good repair, making sure the seats are clean and comfortable, or repairing curtains.  Other days are spent striking sets and loading them up in trucks for the show’s next city appearance.  It’s exhausting, physical work, and there aren’t a lot of women who do what I do professionally, but it’s my passion and joy.  And, I’m lucky enough that my husband works here, too.

One day when we wer

I backed out of the space under the orchestra pit.  That area is technically lower than the river, so I shouldn’t be surprised to find animals down in there.  Maybe that’s why the opossum was down there, to feast on mice or rats or whatever made its way down there.

The more I thought about it, the more I realized that this explains a lot.  Lately, some of the actors and musicians from our latest musical production had been complaining of weird smells around the stage.  Some of the crew had been “spooked” by odd noises when they were working alone in the area.  We joked that it was our resident ghost.  Really, what theater doesn’t have a resident ghost?

But, this explained everything.  It was just an animal.

I made my way up to the office, where my husband was working.  “Hon, we gotta get rid of an opossum,” I said.

He had to see it for himself, of course, and I think he came out of the orchestra pit faster than I did.  Before long, we called Allstate Animal Control to get rid of the opossum.  Fortunately, their guy got it out before we set up for the show that night.  Of course, we still let the actors and musicians believe it was a ghost.