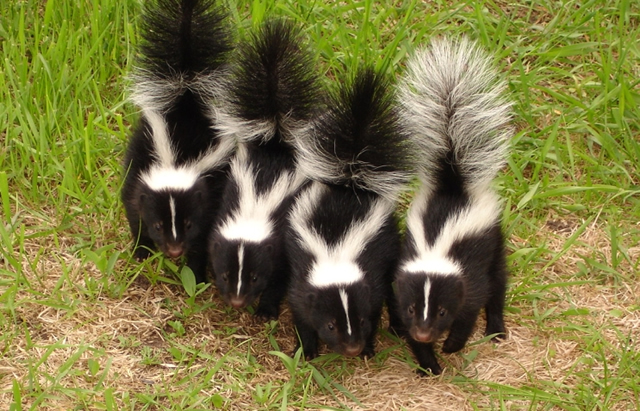 “I found baby skunks in my backyard last night and they were sooooo stinky!”

“Of course, you did,” I sighed.   I helped Camden’s mother out by taking him with my daughter, Emmy, to preschool three times a week.  Camden’s mother was a sweet woman who was overwhelmed by very active children, including twin toddlers who kept her on her toes every moment of the day or night that they were awake.  It was the least I could do for this friend who helped other people as much as she could, as well as raising her family.

But Camden wasn’t known for telling the truth.  Our short drives to and from preschool were filled with lots and lots of unbelievable stories.  Whenever my daughter or I said anything, Camden had to one-up us.  Emmy would say, “My Daddy has a truck and we get to ride in it this weekend.”  Camden would say, “Well, my Daddy has a helicopter and he’s going to hunt bears this weekend.”  I would say, “Isn’t it fun to read books?”  Camden would say, “We have more books than anyone else on the whole planet!  We have almost ten whole rooms filled with books.”

I’m sure it has everything to do with the fact that he’s a middle child.  And, that the youngest two children are twin menaces that demand an incredible amount of his parents’ time.  If it was just telling stories, that’d be understandable.  But, he loves to lie, too.

I got a call from his mother once after he came home and told her I’d locked him in the trunk.  I’m still confused why she would even entertain the veracity of that little story, but whatever.  He told me, in tears, that my daughter cut his hair during preschool class.  I was upset at first, because he was sporting a new bald patch on his head.  Until their teacher assured me he’d done it to himself.

So, you can imagine I had no reason to believe his story when he regaled us with a tale of three baby skunks that he found in his backyard.  He told us they were as tiny as his hand, that they ate his mother’s homemade stew for dinner, that their names were “Stinky,” “Sweaty,” and “Skorp.”  He also told us that their mother skunk attacked the house, sprayed his dog, and tried to take his baby brothers away from him.

I walked him up the stairs to his house, and laughingly told my friend about Camden’s most recent story.

“Actually,” she said, “we did find three baby skunks in the backyard last night.  But, we don’t know where the mother is.  We had to call someone to get rid of the skunks.  The rest of the story?  Well, that’s all Camden.”

Of course it was.