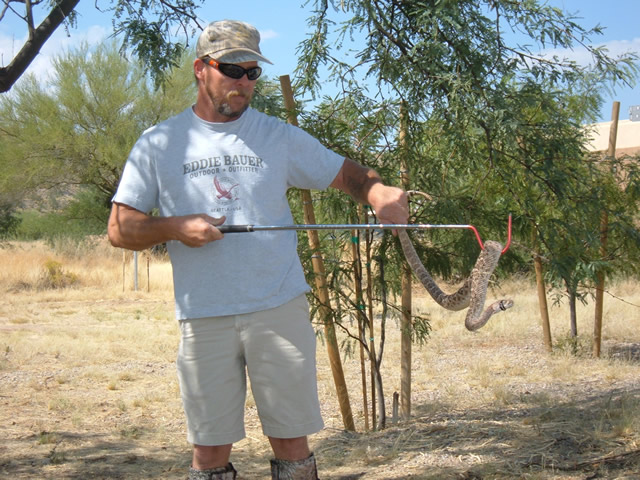 Most guys assume they can do snake removal themselves, but then, most guys don’t assume they’d come toe-to-face with a rattlesnake in their kitchen first thing in the morning.

Gary woke up late in the morning, after working an extra shift the night before.  Finally, a day off, and he wasn’t going to do anything at all.  Just make some coffee, toast a waffle, and sit in front of the TV for a few hours before maybe getting around to a shower.

He grabbed a fairy clean t-shirt out of a pile on the floor, threw on a pair of shorts, and staggered into the kitchen, bare feet slapping on the tile floor.  He got the coffee going and grabbed a waffle out of the freezer, throwing it into the toaster oven.  Then, he saw something move out of the corner of his eye.  “What the . . .?”

A snake’s head coming around the corner, long body slithering behind it, and then its tail rattled.

First thing he did was get out of that kitchen.  Then, he got some shoes on, toes still curling from having been so close to a rattlesnake.  Finally, he grabbed a camera and a phone.  Took some pictures of the snake from a safe distance and called a friend to help him with snake removal.  A rattlesnake was just not the kind of thing he wanted to go at by himself.

The snake curled itself up into a ball on the floor under a counter, rattling its warning sign non-stop.  Gary had run into a bunch of rattlesnakes last summer when hiking with a friend.  They were hiking off a mountain cross-country, not caring much for the marked trail, and started jumping down the slope, leaping from rock to rock.  He jumped on a rock and the sound of ten to twelve snakes rattling stopped him cold.  Right under his feet was a whole nest of ‘em, and they weren’t happy he was standing right above them.  He got off of that rock pretty quick and out of danger, but now one of their kind was curled up in his kitchen, and he just wasn’t okay with that.

His friend showed up ready for snake removal, grabbing a makeshift snake-catcher out of the back of his truck.  Gary decided the best thing he could do to help was to just video the whole thing, stay out of the way.  Before long, the rattler was caught, stuffed in a garbage can, and in the back of his friend’s truck.  They headed out to release it on that same mountain they’d hiked the summer before.

For two weeks after, the first thing Gary did when he woke up in the morning was get some shoes on his feet before going into the kitchen for breakfast.